President Obama to United Nations: “We Do Not Ban Blasphemy” September 26, 2012 Paul Fidalgo

President Obama to United Nations: “We Do Not Ban Blasphemy”

President Obama has disappointed nonbelievers and those who take seriously the concept of church-state separation many times. In his participation in the National Prayer Breakfast, in his continuation and expansion of the Bush-spawned “faith-based initiatives,” and his general pandering to religious figures, such has his inclusion of the risible Rick Warren at his inauguration. 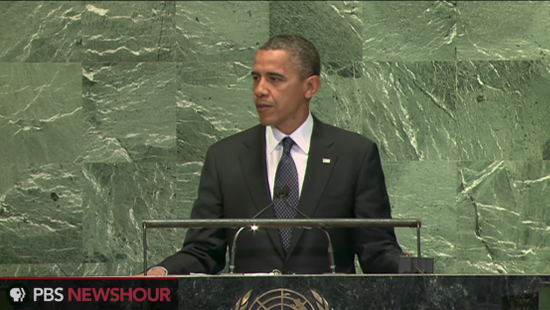 But there are times when the president shows a side of himself that should help seculars take heart. Yesterday, Obama addressed the UN General Assembly, primarily on the topic of the violent unrest in the Muslim world, ostensibly over the Internet video “The Innocence of Muslims.” I am among those who feared that the response of the administration to these events might be to work too hard to try and appease these scandalized rioters with pronouncements about how bad it is to hurt religious feelings.

Instead, he said the right thing. He declared with absolute clarity that no video or hurtful speech is justification for violence, and then stood up for free expression:

I know there are some who ask why we don’t just ban such a video. The answer is enshrined in our laws: our Constitution protects the right to practice free speech. Here in the United States, countless publications provoke offense. Like me, the majority of Americans are Christian, and yet we do not ban blasphemy against our most sacred beliefs.

In what I thought was a fascinating rhetorical choice, from a writer’s perspective, Obama then looked inward for a keen example:

Moreover, as President of our country, and Commander-in-Chief of our military, I accept that people are going to call me awful things every day, and I will always defend their right to do so. Americans have fought and died around the globe to protect the right of all people to express their views — even views that we disagree with.

And then he makes the case for free expression I have been waiting to hear from a world leader for a while now (emphasis mine again):

We do so not because we support hateful speech, but because our Founders understood that without such protections, the capacity of each individual to express their own views, and practice their own faith, may be threatened. We do so because in a diverse society, efforts to restrict speech can become a tool to silence critics, or oppress minorities. We do so because given the power of faith in our lives, and the passion that religious differences can inflame, the strongest weapon against hateful speech is not repression, it is more speech — the voices of tolerance that rally against bigotry and blasphemy, and lift up the values of understanding and mutual respect.

So yes, he’s not perfect on all of our issues. But I was proud to hear him stand up for this most basic human right before the whole world.

September 26, 2012
Joel Osteen: I Didn't Choose to be Straight, but Being Gay is Still Wrong
Next Post