The Freedom From Religion Foundation just put up this billboard in Missouri with the message “Ban Marriage Between Church and State”:

It comes in response to one put up by Catholic Radio reading “1 Man, 1 Woman, For Life!” 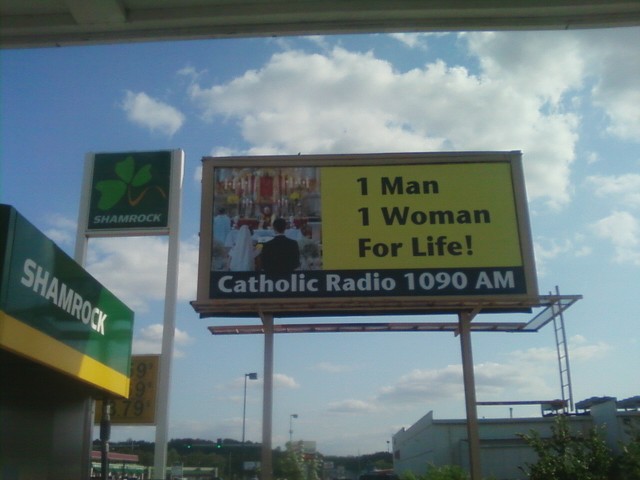 In fact, the two signs are situated fairly close to each other. (Billboard wars!)

Matt Gaines is the Smithville, MO resident and FFRF member who sponsored the billboard:

Gaines said he feels the Catholic-sponsored sign is offensive to gay couples — and even to anyone who has gone through a divorce:

“To denigrate other people’s relationships or the decisions they have had to make with their outdated religious dogmas is simply shameful,” said Gaines.

Said FFRF Co-President Annie Laurie Gaylor: “The only organized opposition to marriage equality comes from the Religious Right. Mormon, Roman Catholic and fundamentalist Protestant churches and organizations have spent hundreds of millions to amend state constitutions to ban gay marriage in the name of Christianity. Religious dogma must be kept out of our secular laws.”

No word yet on how Catholic Radio plans to respond.

September 24, 2012 Beth Presswood on What Makes Her Happy
Browse Our Archives
What Are Your Thoughts?leave a comment