For the past several days, damn near every story about Texas’ Kountze Independent School District and how the cheerleaders there want to hold up run-through banners at football games which have Bible verses on them has been pretty one-sided. The local media interviews the cheerleaders or the parents of the cheerleaders and nobody seems to understand why promoting Christianity at public school events is a problem:

Finally, we get to hear the other side.

In a telephone conversation Friday with KFDM News, Gaylor said “when cheerleaders wear the school name, are chosen by the school, are at a school function, in an official activity, the school is obligated to ensure there isn’t a religious message.”

She says her organization is feeling the wrath of some parents.

“Some parents are bullies,” said Gaylor. “We’ve received horrible phone calls. This is what happens when government or public schools appear to endorse a religion. This is the danger of religion in public schools. This is one tiny case, but we get this all the time. It’s quite a reflection on ignorance in our country.”

We also hear, in a pleasant surprise, from members of the Vidor High School Young Democratic Socialists club. Vidor is about an hour’s drive from Kountze and the student in this group think this whole fight is just ridiculous: 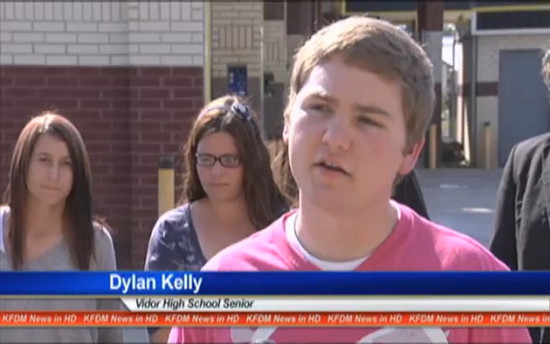 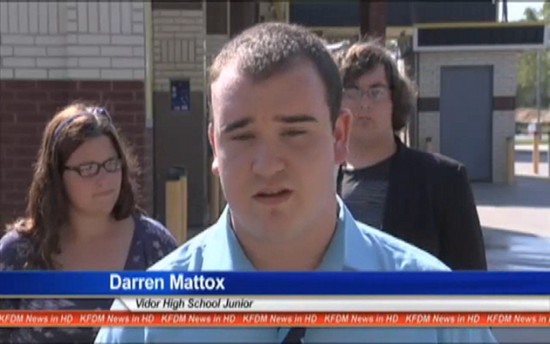 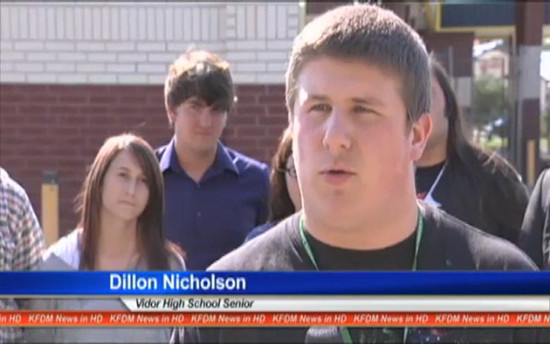 “It’s been so one-sided on this discussion,” Dylan Kelly, a senior at Vidor High School, told KFDM News on Friday. “I feel people need to know that there are people who oppose this, and people who realize everyone should be equal under the law, and everyone should be represented when you have something in the public forum like this.”

Another student said he was first inclined to support the cheerleaders but his thinking changed.

“My initial thought was that I do support it, but when you dig deeper into it, you realize that they are representing the school and that it’s not really Constitutionally right for them to represent the school in that manner,” said Darren Mattox, a Vidor High School junior.

“I just think they’re misrepresenting certain minorities,” said Dillon Nicholson, a Vidor High School senior. “Judaism, Atheism, the lack of a religion, Agnosticism, or Islam, their God or their lack of God wasn’t on this banner. And I think if it were, then that would be equally offensive to the many Christians that are in this community.”

It would be great to hear some dissent from students at Kountze High School, but it takes a lot of courage to speak out against something this popular and I would understand if non-Christians in the district didn’t want to say anything out of fear of being bullied or ostracized.

In the meantime, Kacy at The Ex-Convert is urging everyone to write letters of support to the Kountze district’s superintendent (who told the cheerleaders to stop with the Bible banners) — she even offers a sample letter of her own.

Also, if you’re in that area, you should considering joining a new Facebook group called “Concerned East Texans for Separation of Church and State.”