When U.S. Ambassador Christopher Stevens was killed by terrorists in Benghazi a week and a half ago, the people of Benghazi condemned the attack. They gathered to demonstrate against the violence and to send their condolences to the American people. 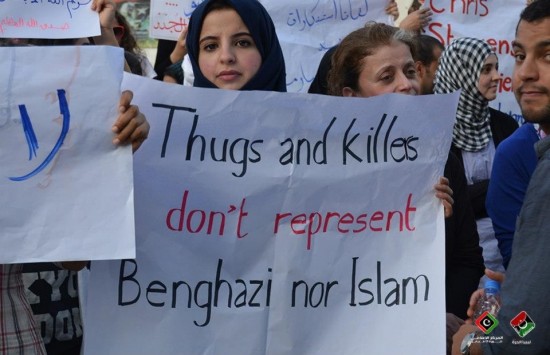 But the protests didn’t end there.

While still angry about the insulting “Innocence of Muslims” film, the people of Benghazi would no longer tolerate the militia group believed to be responsible for the attack on the U.S. consulate. Friday brought a new protest which culminated in crowds of Libyans storming the compound of the militia’s base. A second militia base was attacked resulting in injuries and one death.

While the attack on the Consulate was unrelated to the blasphemous film, the timing tied the events together in the emotional experience of the Libyan people. Yet, everyday Muslims didn’t just condemn the content of the film; they condemned the use of violence as a response used to intimidate and incite fear.

This is a dramatic moment and may mark a turning point in America’s relationship with Islam around the world.

September 22, 2012
Catholic 'Rapper': Gay Marriage is Wrong but We Love the Gays
Next Post