Everyone’s Getting Married the Wrong Way! Except for This Guy, Apparently September 20, 2012 Jessica Bluemke

Everyone’s Getting Married the Wrong Way! Except for This Guy, Apparently

I write a lot of articles about a lot of un-fun topics: People doing physical harm to themselves or others, people crying foul because they don’t get their way all of the time, sundry injustices throughout the world, all sorts of awful things.  I try to keep myself somewhat emotionally separated from the stories, because if I didn’t, I would just drive myself crazy.

For some reason, this story, an opinion piece — on FoxNews.com of all places! — just got under my skin.  I should know better, but I just couldn’t help it.

I’m going to tell you about Steven Crowder’s piece and do my very best to not sink to his level while doing so.

The title of his article is “Waiting till the wedding night — getting married the right way” which wasn’t a great start.

Full disclosure, I am reading this from the standpoint of a 26-year-old gal who lives with her boyfriend.  We have been dating for nearly three years and marriage is definitely on the table once our lives stabilize financially.  I love him very much, and moving in together was a big decision that we made together, and I am thrilled that we did.

Crowder and his wife made the (perfectly fine) decision to wait until they got married before they had sex or lived together.

According to him, they “did it right.” Which, of course, implies that you (you know who you are) did it wrong. 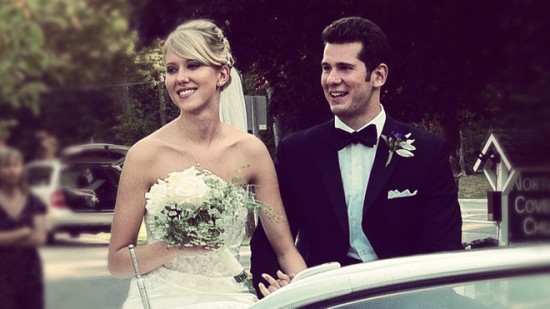 Crowder talks about how he and his fiance were

… judged all throughout our relationship. People laughed, scoffed and poked fun at the young, celibate, naive Christian couple.

We’d certainly never make it to the wedding without schtupping, and if we did, our “wedding night would be awkward and terrible,” they said.

Well that sucks.  People weren’t supportive of the decisions they made as a couple.  That’s pretty lousy of their friends.

Here’s where he loses me, though:

Looking back, I think that the women saying those things felt like the floozies they ultimately were, and the men, with their fickle manhood tied to their pathetic sexual conquests, felt threatened.

Umm… well, that’s quite a sweepingly judgmental statement, Mr. Crowder-Who-Purportedly-Subscribes-To-A-Book-That-Says-‘Judge-Not’.  All women who have sex before they get married are “floozies”?  Isn’t that sweet.

And then he dives head-first into the heavy-duty judging.  He tells the story about the morning after his wedding.  He and his new wife were sitting and basking in each other’s warm newlywed glow, when they overheard that the couple at the table next to them had gotten married. too!  Unfortunately, the groom wasn’t going to make it down to breakfast because of a hangover. And this was Crowder’s absurd reaction:

My heart sank. Firstly, that poor schmuck’s “good time” was simply getting snookered. Not enjoying the company of close family and long-lost friends with a clear head and clean conscience, not staring in awe at his beautiful new wife, wanting to soak in every glimmer of her eyes as she shot him heart-racing looks from across the dance floor, not taking all of the cheesy pictures as they cut the cake, not even carrying her across that suite threshold as they nervously anticipated their “nightcap.” He probably won’t remember any of it. Instead, he got smashed. He was “that guy”… at his own freaking wedding.

Quite a leap, isn’t it?! From “he drank too much last night” to “He was blackout drunk from the moment the bar opened! He probably fell into the cake because he couldn’t stand on his own, drunken legs!  He probably ignored the bride the whole night because he was doing shots!  I bet he just punched his 90-year-old grandma in the face!”

Crowder realized that his wedding was so much more amazing because of all of the aforementioned basking; screw those guys who just wanted to have a “big party.”

I’m not here to tell you whether he did, in fact, get more out of his wedding than that “poor schmuck.”  Maybe he did, maybe he didn’t.  All I am saying is that I think it’s too bad that someone who felt like he was being judged for the decisions he made with his partner is so very quick to slap that judgment on literally the first other married couple he encounters.

Oh, yeah.  And he ended his ever-so-brilliant piece with this:

Do yours the right way.  If you’re young and wondering whether you should wait, whether you should just give in, become a live-in harlot/mimbo and do it the world’s way.  If you’re wondering whether all of the mocking, the ridicule, the incredible difficulty of saving yourself for your spouse is worth it, let me tell you without a doubt that it is. Your wedding can be the most memorable day and night of your life… or just another party.

Oops. Did I just make a “judgment?”  You’re darn right I did.

You’re right, Crowder.  I “gave in.”  I wanted to live with my boyfriend, because I love him and we have a committed relationship.  We had hectic schedules and we never got to see each other, and I wanted him there when I walked through my door, and vice versa.  It was the right decision to make at that moment in our lives in every way, and it was the best decision I have ever made.  I have no regrets.

Call me whatever the hell you want.  Just so long as you don’t “laugh, scoff, or poke fun” at anyone, because you know how it feels to be on the other side of that, right?  Or don’t you remember the first paragraph of your own piece?

I really hope that we all take notice of this Christian love we see here.

What would Jesus do?

Probs call me a harlot.