A few days ago, the Bluegrass Coalition of Reason in Kentucky put up their first billboard:

And, just like that, the Lafayette Church of the Nazarene has put up a weak message of their own in response: 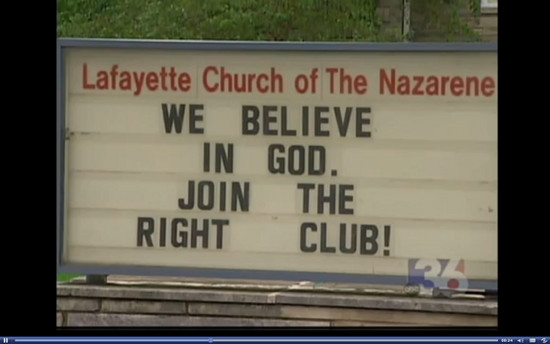 We believe in God. Join the right club!

What?! A church that believes in God?! I’m shocked, I tell you…

The purpose of the atheist billboard is to capture the attention of people who don’t know there are other atheists like them in the area. Everyone knows there are Bible-thumpers every few feet, so I don’t know what they’ll really accomplish.

Kudos to the church for capitalizing on the free publicity, but they missed the entire point.

Also, the pastor gave one hell of an awkward interview in this TV news segment:

The Church’s Pastor says he wasn’t offended by the billboard, but others might have been.

Pastor Jared Henry says, “Yeah, probably God. He was probably offended by it. There are other people who, I’m sure, were offended. I think it was kind of a…the Bible says, Proverbs says a fool says in his heart there is no God.”

I guess God was offended by the fact that atheists exist. How *dare* all of you bully Him like that.

September 20, 2012
In Cranston, People Are Complaining About the 'Banning' of a Father-Daughter Dance
Next Post