New Evidence Definitively Says Jesus May or May Not Have Been Married! September 19, 2012 Jessica Bluemke

New Evidence Definitively Says Jesus May or May Not Have Been Married!

Harvard Divinity School professor Karen King has announced the discovery of a 2nd century fragment of papyrus that contains the words “Jesus said to them, ‘My wife…'” 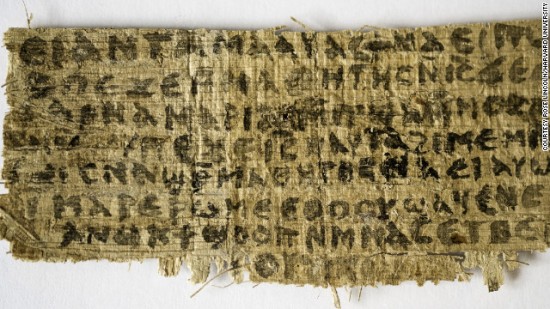 So what does this mean?

Well, it turns out, not a whole hell of a lot:

King has been quick to add this discovered text “does not, however, provide evidence that the historical Jesus was married,” she wrote in a draft of her analysis of the fragment set to appear in the January edition of Harvard Theological Review.

“This fragment, this new piece of papyrus evidence, does not prove that (Jesus) was married, nor does it prove that he was not married. The earliest reliable historical tradition is completely silent on that. So we’re in the same position we were before it was found. We don’t know if he was married or not,” King said in a conference call with reporters.

“There’s no indication we have that Jesus was married,” said Darrell Bock, a senior research professor of New Testament studies at Dallas Theological Seminary. “One could say the text is silent on Jesus’ marital status is because there was nothing to say.”

“It’s a historical curiosity but doesn’t really tell us who Jesus was,” Bock said.

To quote my coworker: “It’s enough info for a kind of interesting Tweet.”

Of course, everything we find that can help us fill in the puzzle that is human history is interesting and adds to our understanding… but let’s not get too carried away here.

We now know that maybe some people from the 2nd century might have believed that Jesus was married.