At a lot of high school football games, to pump up the crowd and the players, the cheerleaders hold some sort of large paper sign in front of the tunnel and the players *burst* through it as they make their way onto the field.

If you’re in Kountze, Texas, though, the signs look very out of place for a public high school: 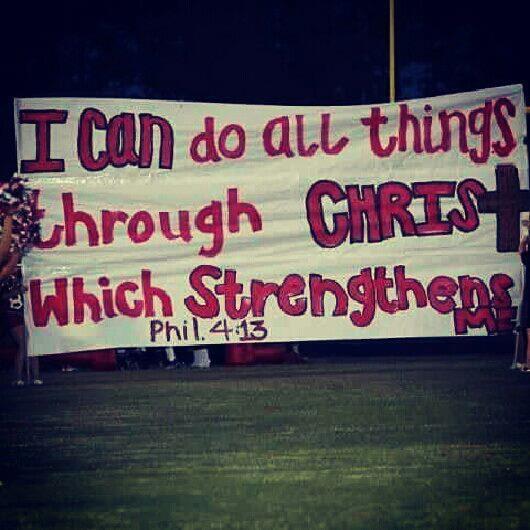 Hmm… how did Bible verses become an official part of the Kountze High School football games? This isn’t just a group of students praying on their own — this is part of the ritual for the Lions’ home games.

Recently, someone complained about the practice and the superintendent — presumably knowing that what they were doing was illegal — told the cheerleaders they had to put a stop to it.

Guess what? The community isn’t taking this news well. A Facebook group called “Support Kountze Kids Faith” has gained over 7,000 followers in less than a day. By the time you read this, I suspect local news channels will have already covered the story.

Maybe someone should tell all these people about the cheerleaders at Lakeview-Fort Oglethorpe High School in Georgia. In 2009, they were doing the exact same thing:

The school board put a stop to their proselytizing before a lawsuit was filed and saved the district who-knows-how-much money. Even more interesting was that the parent who complained was a graduate of Jerry Falwell‘s Liberty University. When even a super-conservative Christian knows that this method of spreading faith is a bad idea, schools should take the hint.

By the way, in Georgia, the students and parents responded by bringing their own religious signs into the stands — something that is perfectly legal and no one complained about.

As I wrote in 2009, I would love to know how the cheerleaders (and Christian supporters) would feel if they had to hold up a banner reading:

If they have the slightest bit of discomfort with that, then they need to stop with their Bible verses.

The commenters on the Facebook group are acting like they’re martyrs in a struggle worthy of an awful Kirk Cameron movie. They’re not. They’re just Christians who think it’s their duty to push their faith everywhere they go and who don’t care one bit about how the Muslims and Jews and atheists and other non-Christians in their community might feel.

If they don’t put a stop to it themselves and take the high road, then a judge will do it for them. And the group that files the lawsuit against the school stands to rake in a good chunk of money from either the district or the Christian group defending them.

(Thanks to Faithless Female for the link!)