12-Year-Old Jackson Ripley Gives Me Hope For The Future

When I was twelve years old, I was really concerned about whether or not I could learn and perform all of the dances from Britney Spears‘ videos.  It was a big deal, and took up a whole lot of my time.  And this was before YouTube and DVRs.

I was most certainly not writing concerned letters to presidential candidates.  Heck, I couldn’t even be bothered to write fan letters.

Jackson Ripley thinks Mitt Romney is getting some big things wrong in his campaign, and he wants to share his thoughts. 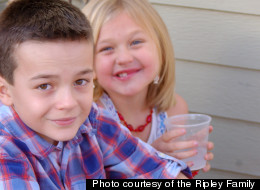 Evidently, Jackson has seen first hand how Romney’s proposed repeal of Obamacare will affect his family and families like his:

Jackson’s strong political beliefs appear to have, in part, grown naturally from his family’s life experiences beginning with his little sister Kennedy who has had pre-existing conditions since she was just 4 weeks old.

Shortly after Kennedy was born, she developed a hemangioma — an abnormal, raised tumor of blood vessels — on her face. According to her mother, Lindsay Ripley, only 10 percent of children are born with a hemangioma and less than one percent of the cases are life-threatening, like Kennedy’s.

The tumor grew so large that at just nine months old, Kennedy was diagnosed with congestive heart failure.

“She was very ill and in and out of the hospital for the first two years of her life. During which she had several procedures, surgeries, MRI’s, CT’s and hospitalized many, many times, making her our million dollar baby when she was around a year old,” Lindsay Ripley told The Huffington Post.

For a brief three months in 2009, John Ripley, Jackson and Kennedy’s dad, was without a job.  When he was hired again, the small size of the company forced the Ripley’s to shop for insurance elsewhere.  Time after time, Kennedy was denied insurance due to her pre-existing condition.

I think partly due to his sister’s illness, at an early age Jackson began to notice injustices in the world that many children never see. Writing has always been a great outlet for Jackson, so three years ago when he was upset about the war in Iraq, we said, “write a letter to the president.” And Jackson did. A year later when Jackson saw a homeless man in Cherry Creek and became very upset, we said “write a letter.” After buying the man a Cinnabon, Jackson wrote to then-Mayor John Hickenlooper and thanked him for his efforts to end homelessness in Denver. When Jackson came home from school last week, I had the news on and they were discussing the fate of health care and preexisting condition coverage if Governor Romney were to become president. Jackson watched the segment with me. When it was over, Jackson stood up and said, “Excuse me mom, I have to go write a very strongly-worded letter!” So John and I no longer say “write a letter” because he does it on his own.

Jackson’s full letter is pretty amazing and surprisingly insightful (no word on how much help, if any, he got from his family).  But the ending is my favorite part:

Also, you’re domestic plans (birth control, gay rights etc.) are horrible! Women should get to manage their own health, and if you wonder why you’re not appealing to many women voters, rethink your birth control and women’s’ rights plans. And people should be able to marry whom they want. We built this country so people could have freedom, and not have religious beliefs control them to that length. This country was in no way built on any religion, so we should not create laws that repress the American people in a religious way and hurt our most vulnerable.

Now, it’s been some time since I was 12, and I don’t interact with all that many children, but I have a suspicion that this kid is pretty bright beyond his years.

Best of all, it doesn’t look like Jackson is just mimicking his parents without doing any critical thinking of his own. This is his letter, through and through.

September 19, 2012
Last Chance to Vote to Help Some Great Atheist Organizations
Next Post