About a week ago, the University of Tennessee at Chattanooga said they would stop their practice of public Christian prayers before home football games.

But what about UTC’s sibling school, the University of Tennessee, Knoxville? That’s the school with the major football program, the school where Peyton Manning played, the school where the exact same type of prayer was taking place. Would they stop, too?

The Freedom From Religion Foundation sent them a letter of complaint late last week, focusing on the problem with asking the crowd to stand for a clergy-led prayer that “routinely invoke[s] Jesus Christ.”

Tonight, we get the first response from the university: They’re keeping the prayer:

Tuesday, UT said it is drafting a full response to the foundation, but officials said they believe their tradition follows court guidelines.

This isn’t a battle the school will win. History isn’t on their side. They’ll kick and scream about this. They’ll whine about it. Their strategies will eventually backfire. And the other side will ultimately come out on top.

But if this is a fight UT wants, they’ll get it. It’ll pit those of us who support church/state separation against a community built around college football and church. It’s a distraction that doesn’t need to happen since all the people attending the games have every right to pray before the games… but judging from the comments on several news websites, you’d never know that.

Though there is a poll on the Knoxville News Sentinel‘s website you may want to crash: 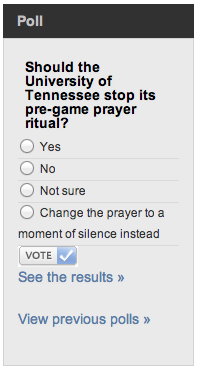 September 18, 2012
Religious Right Group Tells Kids Bullying Isn't OK, but Neither Is Being Gay
Next Post