The Albuquerque chapter of the Freedom From Religion Foundation bought a full=page ad in today’s Albuquerque Journal marking Constitution Day, the anniversary of when the document was ratified: 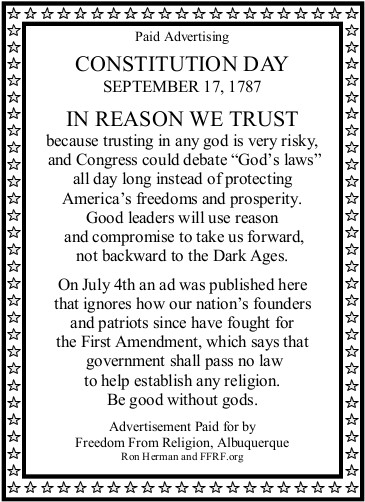 It’s a response to a full-page ad placed by the Hobby Lobby chain declaring the country a “Christian Nation”:

“We feel it is important to respond to the full page ‘In God We Trust’ ad placed by Hobby Lobby in the Albuquerque Journal on July 4, which we have researched and found to be very inaccurate and deceptive,” said Ron Herman, director of the chapter.

To paraphrase an argument I’ve heard many times before, the word “religion” is mentioned twice in the Constitution, and both times, it’s preceded by the word “No.”

September 17, 2012
Is This 'Religious Child Abuse' Image Just a Strawman?
Next Post

September 18, 2012 Atheists Beat the Illinois Family Institute At Their Own Game
Browse Our Archives
What Are Your Thoughts?leave a comment