Who Needs A Coach When You Have Prayer? September 16, 2012 Jessica Bluemke

Who Needs A Coach When You Have Prayer?

Marathon runner Ryan Hall has had a rough year. 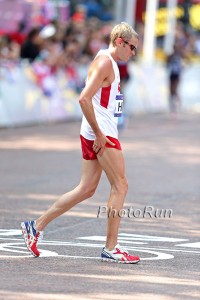 He developed plantar fasciitis on his left foot, which lead to a hamstring injury (causing him to drop out of the Olympic Marathon), which lead to a quad injury, which means he’s missing the New York City Marathon this November.  He hasn’t been able to run for three weeks which, for a serious runner, sucks.

Hall is even re-evaluating his coaching situation. Two years ago, he left coach Terrence Mahon and the Mammoth Track Club to strike out on his own. Hall has called it faith-based coaching, relying on prayer and what he calls conversation with God to steer his training and racing decisions.

Evidently, it has not worked out so great for him.

I am not trying to kick the guy while he is down, but I think that this case is a really good example of how a healthy skepticism can keep you, well, healthy.

And Hall received no shortage of remedies for the [plantar fasciitis] from family, friends, and strangers. His father suggested wrapping the foot with duct tape.

To be fair, it isn’t clear if he took his dad up on the suggestion.  However, after Hall had an MRI that revealed a severe strain in his hamstring, he certainly went to a different doctor than I would have:

Hall, who splits training time between Redding and Flagstaff, Arizona, plans to travel today to Phoenix to be examined by his long-time therapist, chiropractor John Ball. Hall wants Ball’s input on the status of the left quad and his body in general.

Yikes.  Not the person a professional athlete with a potentially career ending leg injury should be seeing.

I hope for the best for Hall.  I also really hope he puts his athletic career in the hands of trained coaches and doctors and not invisible men in the sky and chiropractors.