About a week ago, I talked about Minnesota Vikings punter Chris Kluwe and his amazing letter about gay rights.

I didn’t get terribly far into how Kluwe came to write that letter, and in doing so, I only briefly touched on the other hero of that story, Brendon Ayanbadejo.

Here’s a recap: Ayanbadejo had participated in a video for a series of spots called “Marylanders for Marriage Equality” (Maryland is one of four states where gay marriage is going to be put to a vote this November).

When Maryland delegate  Emmett C. Burns Jr. caught wind of this, he sent a letter to Raven’s owner Steve Bisciotti asking that he please shut his players the hell up. That’s when Kluwe wrote his amazing letter and set a new bar for awesome/snarky writing that I can only hope to come close to.

So that brings us up to the last few days. 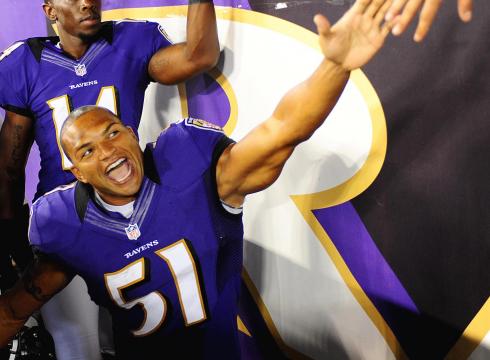 Ayanbadejo took to the cable news outlets to defend his position and to thank Burns for shining a giant spotlight on this issue:

Mr. Ayanbadejo, I owe you an apology, sir.  For a couple of reasons, actually.

First of all, I didn’t give you the appropriate credit for speaking out in the first place.  I was blinded by Kluwe, his letter, and his short last name that was so easy to type.

“If you look back 50 years, the civil rights issue of the day was segregation,” Kluwe says. “A hundred years ago, it was suffrage; 150 years ago it, was slavery. And 50 years from now, what are our children going to think of us and what we stood for?

Can you blame me?

But back to Ayanbadejo.

I’m also sorry that I didn’t properly recognize your role as an ambassador for gay rights within the NFL, and how difficult that could be:

“The tide is changing,” Ayanbadejo said. He’s noticed a shift in NFL locker rooms that he feels mirrors a shift in society. Some teammates used to call him gay when he advocated gay rights, he says; now they listen to him even when they don’t agree. Many players who oppose same-sex marriage do so on religious grounds, he noted.

“I’m against it,” New York Giants offensive tackle Will Beatty said. “It’s just my religious background and, from what I understand from reading the Bible, it’s a sin. I mean, we all have sins. No one’s perfect. That doesn’t mean I’m for sin.”

Ayanbadejo respects the opinion but disagrees with it.

“The disconnect is that religion is not law,” he said. “And some guys have trouble seeing the difference.”

In summation, you shattered my assumption that linebackers are probably just meatheads.  I was wrong.  You are extremely eloquent and well-spoken and super awesome.  I am sorry.

Also, if you wanted to come back to the Bears, that would be really, really cool.