When Preachers Come to Campus, the Atheists Are Ready September 14, 2012 Hemant Mehta

When Preachers Come to Campus, the Atheists Are Ready

What do you do when Brother Jed and Sister Cindy come to preach fire and brimstone on your campus?

At the University of Illinois, you pass out a BINGO card with their stock phrases.

At Texas A&M University, you use the event to raise money for women’s groups, LGBT groups, and atheist groups — basically, everything they condemn.

At the University of Minnesota, you join forces with other groups on campus to stage an entertaining protest:

[Brother Jed’s] arrival on campus Wednesday morning was met with a large protest led by several University student groups including Campus Atheists, Skeptics, and Humanists, the Lutheran Campus Ministry and the Queer Student Cultural Center. The groups were joined in protest by many University students passing by to take in the scene or engaging with Smock in what turned into an animated debate.

The Lutheran Campus Ministry became involved because Smock is “so different from anything we associate with Christianity,” said Pastor Kate Reuer. She said she and the ministry “firmly believe that God’s love exists for all people.”

University protesters engaged in other activities including bingo, Twister and counter-preaching to divert attention away from Smock’s messages.

Love it! What makes this so effective is that the spotlight turned away from the nasty preachers and onto the students countering them.

It even made the front page (PDF) of the campus newspaper: 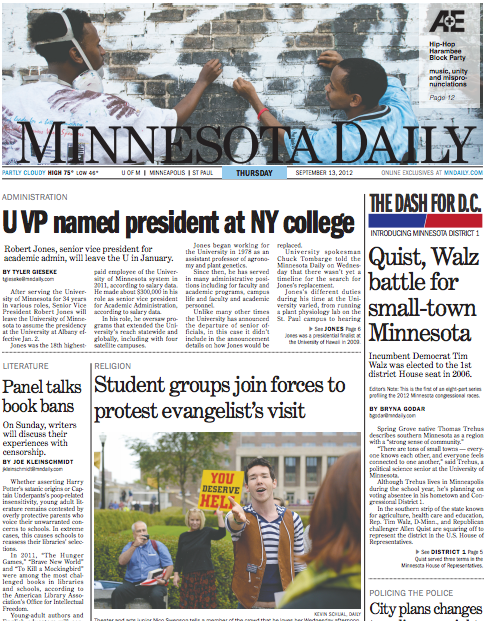 September 14, 2012
Church Leaders in Toronto Upset at Having to Pay Fair Price for Rental Space
Next Post