The Toronto District School Board is facing a $110,000,000 budget shortfall so they need to come up with ways to save or make money before they resort to more drastic actions (like laying off staff).

One example: Raising the cost for community groups to rent out school space. Not only is the price going up, there’s been an overhaul of the categories (PDF) indicating which groups get cheaper (subsidized) rates. 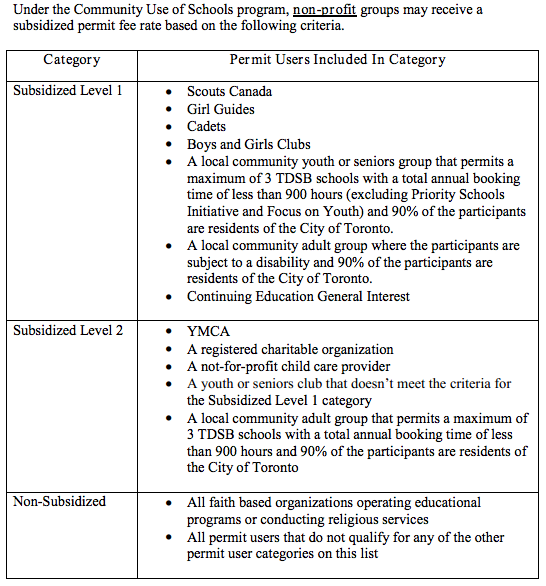 Did you catch that bit at the end? Turns out religious groups aren’t getting special treatment anymore. In fact, they’ll have to pay the same rate as, say, adult sports leagues who want to rent out the gym.

As you might predict, Christian leaders in the area aren’t handling this news very well:

“It feels like constructive eviction,” said Pastor Dan MacDonald of Grace Toronto Church. “Our confidence in the board has been greatly damaged, and I would like an answer as to why religious groups got singled out.”

MacDonald said his church is facing an increase from $78,000 to $190,000 annually for the use of Rosedale Heights’s auditorium, cafeteria, and a few classrooms for four hours a week.

Rev. Yoga Thomas of Scarborough’s Living Word Missionary Church said he was left “clueless, frustrated and disappointed” after learning his annual agreement would rise to more than $100,000 from $14,000 if the church uses the same facilities.

No one’s getting “singled out.” This isn’t discrimination. This is business. The school district doesn’t owe the local churches any favors. They have every right to rent out the facilities at whatever prices they see fit and the churches can either pay the rent or find other space.

It’s amazing that so many of the stories I write about on this site are about minorities (atheists, LGBT groups, etc.) fighting for equal access… while stories of Christian groups tend to focus on how they want special access.

September 14, 2012
If Atheists Really Cared About Social Justice...
Next Post

September 14, 2012 When Preachers Come to Campus, the Atheists Are Ready
Browse Our Archives
What Are Your Thoughts?leave a comment