Former Evangelical Leader Opens Up About How He Was Shunned After Saying He Supported Civil Unions September 13, 2012 Hemant Mehta

In 2008, Richard Cizik, the vice-president for governmental relations at the National Association of Evangelicals (NAE), made a mistake.

He told the truth. 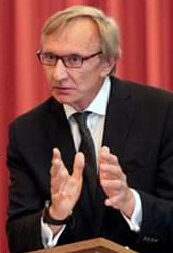 In an interview with Terry Gross on NPR’s Fresh Air, he said this about his attitude toward gay marriage:

“I’m shifting, I have to admit. In other words, I would willingly say that I believe in civil unions. I don’t officially support redefining marriage from its traditional definition, I don’t think.”

What?! He supported civil unions and didn’t think marriage should be redefined? That’s hesitation!

So, in loving Christian fashion, the NAE forced him to resign.

Two years later, Cizik went back on Gross’ show and said he stood by his initial comments.

Now, Cizik has opened up more than ever before. In an article at Religion & Politics — adapted from a contribution he made to the book A New Evangelical Manifesto — Cizik talks about what really happened after he made the mistake of saying that he didn’t totally oppose gay people in a loving relationship:

This event devastated me and my family. We were shocked that such a drastic action had been taken. “Please have your office cleared out within a few days” — these were my instructions. That wasn’t an easy thing to do. I had worked for the [NAE] since 1980, and this was 2008. So, for twenty-eight years I had faithfully represented the organization, the last ten as vice president. I loved it and the people I had worked with.

The impacts were felt personally and professionally. It prompted the president of Houghton College to write and cancel my graduation speech. It prompted Denver Seminary, where I had graduated, to drop me from the Advisory Board of the Grounds Institute of Public Ethics. It prompted the head of a family ministry, Marriage Savers, which I had served as a board member, to call me and tell me, “We’re dropping you from the board of directors.”

Sadly, it prompted friends and colleagues to shun me and no longer inquire about my health and well-being. Even our friends from church, where we had attended faithfully for a decade, didn’t understand.

Despite all the backlash from fellow Christians, Cizik doesn’t regret what he said. In fact, he argues, younger Christians are on his side. And the NAE is just heading toward obsolescence:

… Did [the NAE] really do the right thing? What message did it send?

Inescapably, the message is this: “We are controlled and intimidated by the Religious (that is, Political) Right and will do whatever it takes to avoid their criticism.”

… No matter the heresy, or bad judgment, organizations such as the National Association of Evangelicals will choose to walk away from a controversy before they will confront the major figures of the Religious Right.

Cizik doesn’t come out in full support of gay marriage in the piece… but he doesn’t have to. That’s not the point. He’s just trying to point out how political the evangelical Christian world has become and how problematic that is for their survival. “… [T]he evangelical world is unable to tolerate dissent,” he writes.

When you can’t properly deal with people who agree with you on the major issues but disagree on the minor ones, your movement isn’t going to go anywhere but down.

September 12, 2012
You Are Your Own Moral Guide
Next Post

September 13, 2012 If You Attend the University of Tennessee, Knoxville...
Browse Our Archives
What Are Your Thoughts?leave a comment