The Illinois Family Institute is back and they’re going after their arch-nemeses: English teachers. Because, as we all know, English departments are stacked with evil liberals who must be stopped at all costs.

Here’s what you need to know.

The teacher in question teaches an elective “film as lit” class for seniors. In essence, instead of reading and analyzing novels for message, technique, structure, etc., they do it with movies.

Ideally, you need to select movies that have a lot of depth, hold the possibility of lengthy discussions, and will keep the attention of the students.

So the teacher chose Brokeback Mountain, American Beauty, Eternal Sunshine of the Spotless Mind, and Fargo. If I were a senior, I’d sign up for that class immediately. Sounds awesome. 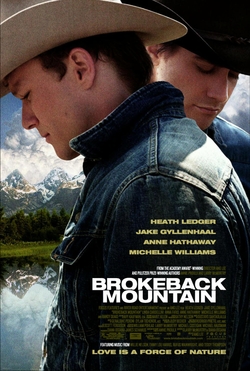 Of course, since some of the movies are rated R, the teacher needs permission from the students’ parents before they can watch the films in class. And if the parents say no (or the student doesn’t want to watch a certain movie), there are alternative and comparable assignments the students can do instead.

It’s not very different from an English class with novels featuring adult themes.

In what I presume is the “permission” letter the teacher sent home to parents, the teacher explained why she chose the movies she did:

The primary objective in viewing Brokeback Mountain is to evaluate the film from the perspective of the text as an adaptation. In fact, one of the three Oscars it won was for “Best Writing & Adapted Screenplay.” The Annie Proulx short story, originally published in the New Yorker, is quality writing, and both the story and the film are texts that most of the students have not encountered. I like the film particularly because it was originally a short story (as opposed to a novel), thus the process of adaptation posed more of a challenge. I think the class will have a lot to discuss with this one. The prose is challenging, but the film is a good “payoff” for them in terms of viewing, particularly because it has such a good star appeal at this point in our culture.

The sexual element, while provocative, is tasteful. Naturally, we will discuss the standard literary elements of plot, theme, symbolism, etc., but again, the primary focus is on how the film holds up to (or surpasses) the original script…

I have given a lot of thought to these selections and, after consulting with colleagues and my department chair, have chosen a few that do contain more difficult material… The sexual aspects of the film do not necessarily “advance the teaching of adapting text,” but they are nonetheless an integral part of what is, overall, a valuable and powerful story (as are so many rated R films!)… I have often contended that when students consume films of a more graphic nature in a safe and structured classroom environment, they have an opportunity to process the content in a more thoughtful way, as opposed to a point in his life when he is more likely to watch it alone or with friends and not be able to have mature conversations about it.

It’s a letter sensitive to parents who might doubt the teacher’s intentions, but I think it accomplishes her goal of setting their minds at ease.

Anyway, as you might expect, IFI’s Laurie Higgins is flipping out about the inclusion of Brokeback Mountain because it portrays a gay couple in a positive light and has some suggestive scenes.

One of the serious problems with this film is that it powerfully depicts a homosexual relationship as a good thing. It uses the immense persuasive force of narrative and imagery to depict that which is perverse as good. Even without graphic sex, this film is troubling because its central thesis is flawed. Sex between two men does not ennoble their love; it corrupts it.

This sort of “Christian love” is typical of IFI.

They’re encouraging their member to complain to the district Superintendent and the school board — much as they did for me, though Higgins did the dirty work herself at the time.

Since this particular teacher works in a district neighboring mine, I sent her a letter of support (not that she needs it), letting her know that, in my case, IFI’s threats accomplished nothing because my administration knew my religious views were something I only discussed outside of the classroom and, furthermore, not a single parent called my superiors to complain about me or remove their kids from my classes despite IFI sending out three press releases denouncing me as an atheist who criticized them and a bad role model for children.

I’m hoping the same fate falls upon this teacher — that her department chair and administration realize she’s engaging her students in an effective way and leading them in compelling, constructive discussions.

And when she comes away from this attack unscathed, I want her superiors to note her professionalism and courage in her yearly evaluation.

September 11, 2012
Will McAvoy on the Myth of a Christian Nation
Next Post

September 12, 2012 S.E. Cupp: One Day, Americans Will Regret Our 'Militant Atheism'
Browse Our Archives
What Are Your Thoughts?leave a comment