Pastor Terry Jones, a Christian pastor who specializes in making everyone in the world hate him, recently announced yesterday that today was International Judge Muhammad Day:

In the video, Jones refers to “Hussein Obama,” calls Muhammad “Mo,” says Muhammad was a pedophile… the list goes on.

Jones was also promoting a movie with a misnomer of a title — Innocence of Muslims — that compares Muhammad to a goat and Muslims to “child-lovers.”

Anyway, there are now riots taking place in Libya and Cairo. Rioters today “scaled the embassy walls and one of them tore down the US flag, replacing it with a black one inscribed with the Muslim profession of faith.”

Because that’s a rational response…

***Edit***: The protests are in response to the movie, not Jones, though his promotion of the film has not helped matters.

It’s not just a protest. One U.S. official has already died as a result of the violence.

So how does the U.S. Embassy in Cairo — where much of this is taking place — react to all this?

Instead of calling the violence an overreaction to one man’s warped viewpoint and the film he’s promoting, they’ve caved in and put all the blame on Jones (who did nothing violent whatsoever): 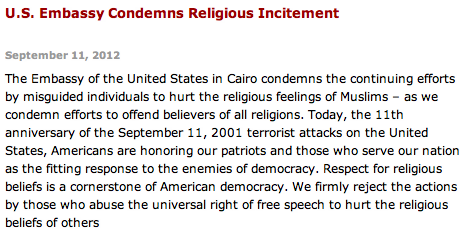 The Embassy of the United States in Cairo condemns the continuing efforts by misguided individuals to hurt the religious feelings of Muslims — as we condemn efforts to offend believers of all religions. Today, the 11th anniversary of the September 11, 2001 terrorist attacks on the United States, Americans are honoring our patriots and those who serve our nation as the fitting response to the enemies of democracy. Respect for religious beliefs is a cornerstone of American democracy. We firmly reject the actions by those who abuse the universal right of free speech to hurt the religious beliefs of others.

Goddammit. The U.S. Embassy is going to force me to side with Terry Jones.

Religious beliefs deserve no respect. Religious people do, and even they aren’t immune from criticism. Blaming Terry Jones for the overreaction of extremists makes as much sense as blaming Salman Rushdie for having a fatwa issued against him for writing The Satanic Verses.

The politically correct part of me understands why they did it. They’re trying not to fan the flames. But by issuing that statement, they’re saying that the people using their right to free speech (though unpopular) are to blame for how it is received by people who can’t deal with any criticism whatsoever.

***Update 1***: I found out after posting this that the Embassy released the previous statement before the violent attacks. That still doesn’t mean religious beliefs deserve respect. And, as far as I know, the Embassy has not revised their statement in light of the violence.

Is Terry Jones a bigot? Obviously.

Is he trying to piss off Muslims? Yep.

Do Americans give a shit what he has to say about anything? Not at all. He’s like the Westboro Baptist Church. He’s famous for being hateful. His fan base is tiny.

At least on Twitter, the Embassy has criticized both Jones (without naming him) and the rioters:

2) Of course we condemn breaches of our compound, we’re the ones actually living through this.

3) Sorry, but neither breaches of our compound or angry messages will dissuade us from defending freedom of speech AND criticizing bigotry

Jones is an awful human being. But he’s not hurting anybody. That’s more than we can say about the extremists who think violence is the response to offensive speech.

***Update 2***: Secretary of State Hillary Clinton issued this statement in response to the attacks:

I condemn in the strongest terms the attack on our mission in Benghazi today. As we work to secure our personnel and facilities, we have confirmed that one of our State Department officers was killed. We are heartbroken by this terrible loss. Our thoughts and prayers are with his family and those who have suffered in this attack.

Some have sought to justify this vicious behavior as a response to inflammatory material posted on the Internet. The United States deplores any intentional effort to denigrate the religious beliefs of others. Our commitment to religious tolerance goes back to the very beginning of our nation. But let me be clear: There is never any justification for violent acts of this kind.

September 11, 2012
Focus on the Family is Giving Up on Reaching Out to Millennials
Next Post

September 11, 2012 Will McAvoy on the Myth of a Christian Nation
Browse Our Archives
What Are Your Thoughts?leave a comment