Celebrating a Woman’s Right To Wear A Hijab, But Not Her Right To Be Heard September 9, 2012 Jessica Bluemke

Celebrating a Woman’s Right To Wear A Hijab, But Not Her Right To Be Heard

On Tuesday, about 200 women in Lahore, Pakistan rallied for their right to wear a hijab — a scarf that covers a woman’s hair and neck — in public.

They carried signs like “My niqab, my right” and “Hijab empowers women” and “Hijab is our identity.”

Which is great.  I mean, I have my own issues with women feeling obligated to cover themselves, sure.  And there are some logistical issues with security and identification with not being able to see someones face that are still being worked out.  But I am pro-freedom of expression in all its forms. So while I am troubled by the concept, I want to support a woman’s right to dress herself as she sees fit. 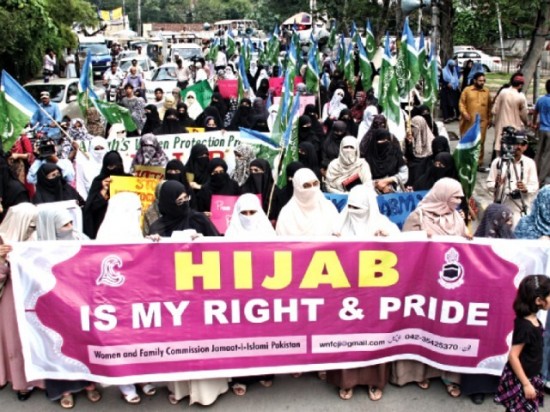 Here’s the problem with World Hijab Day, though.  On a day where women came together to have their voices and opinions heard, you would have expected some powerful speeches about what it means to be a Muslim woman or moving stories of hardships that Muslim women faced from discrimination.

But there were no such moving speeches from women.

Because no women spoke at the rally.

Baloch thanked the participants, saying they had joined in purely for their love of Islam. He said Islam gave high status to women. He said no man was allowed to physically abuse a woman or stop her from getting an education. But, he said, social norms for women and men are different, just as their bodies are different. He said it was wrong to say that the West has given women liberty. In fact, Islam gave women freedom. He said that women were exploited commercially as sexual objects in Western countries and this was not civilised behaviour. He said this practice had also ruined the institution of the family.

Baloch condemned the United States for putting Aafia Siddiqi in prison. He praised a female politician in Turkey who had decided to quit her seat rather than give up her hijab.

Azeem said in his speech that the hijab represented a woman’s dignity and was part of Pakistani civilisation. He said anti-Islam elements were always seeking to strike a blow against Islam and they were trying to steal Muslims’ identity from them. He said the West wanted to snatch the hijab from Muslim women, but they must resist.

It sounds to me like this rally was less about women having the freedom to wear what they want, which could be empowering, and more about how the West sucks and is trying to destroy Islam.

Which is ironic when you consider how some people in the West are accusing Islam of taking over the West… Let that one sink in for just a moment.

Also, bragging about how they’re not allowed to abuse their women-folk isn’t as impressive as they seem to think.

Regardless, I just don’t think it’s a great PR move to stage a rally about how women really want to be wearing their hijabs because it is their right, their privilege, and their pleasure to do so… and then have zero women speak about how they really want to wear their hijabs.