Correct answer: Not the Republicans. Obviously.

Correct answer: Not the Democrats. Unfortunately.

Correct answer: Whatever third party that you care about that no one else cares about. 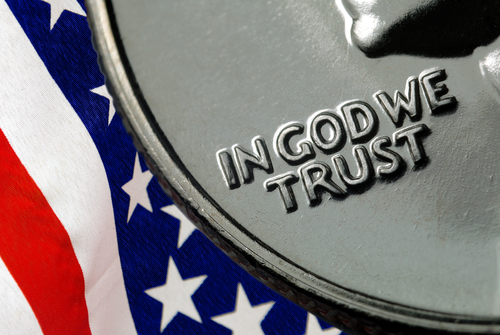 Back to the Democrats, though. They’re all about the inclusion of God in their platform (even if it’s mild) and the expansion of the office of faith-based initiatives. They love pandering to the religion masses. And, politically, why wouldn’t they? Religious groups have the numbers and those groups come out and vote. There may be millions of Secular Americans out there but good luck getting us to do anything together, including voting for a candidate who isn’t beholden to the Religious Right. If we can’t get our act together, the candidates have every right to ignore us.

But the Democrats are obviously better than the Republicans on our issues and they need our support even if they only throw us a bone every once in a while. If they can find a way to support same-sex marriage, I have hope they can eventually be inclusive of atheists, too… but we have to keep forcing their hand by calling them out on it when they suggest faith is a virtue, promote religion through legislation, or ignore our demographics.

I’m still voting for President Obama and I think you’re wasting your vote if you go for a third party, especially if you live in a swing state. Your “statement” won’t make things any better. Not this year and not with any of the current third party candidates.

That’s the gist of what I said to The Christian Post when they asked me about the future of the atheist vote: Will we continue to support the Democrats despite their faith-y convention? Or will we go to another party?

“The Democrats have done a lot for us, and they’re the only viable option in this election, but even they invoke the Christian God’s name much to the chagrin of secular Americans and other non-Christians.”

Mehta commented that atheists’ best chance of having their voices heard is not to form a third party, but to “educate our current elected officials on our issues and explain to them that religious belief is not something all Americans hold dear or virtuous.”

“I don’t think it’s asking a lot for all politicians to say that atheists are just as much part of the fabric of our society as religious Americans, but too often, that’s politically toxic for them. Our community needs to help change that. For better or for worse, the Democrats continue to be our best option for that change,” he added.

Cue all the comments telling me how voting for [insert your third party candidate here] is going to make a huge difference.

On a related note, the other night, as I was watching the DNC, a lot of atheists on Twitter were complaining about the use of the phrase “God Bless America” by just about all of the Democrats.

In other words, they were complaining about a platitude that the candidates don’t even take very seriously. The politicians say it because they need to in order to get re-elected, not because they don’t care about atheists. It’s like wearing a flag pin — it goes unnoticed by just about everyone when they wear it and it’s a controversy if they don’t.

I care much more about the policies the candidates implement than random insertions of God into their speeches, which is why I said this:

Lots of atheists on Twitter making mountains out of molehills about politicians’ casual/not-that-big-a-deal references to faith. #DNC2012

Just to be clear, I’m not saying people should stop complaining about those things — I’m glad atheists are speaking out against even those innocuous statements — but keep it in perspective.

A rhetorical flourish isn’t the same thing as a minor-league theocracy.

Complain about Cardinal Dolan giving an invocation all you want. Complain about the promotion of “faith” in the party platform. But Bill Clinton and Barack Obama saying “God Bless America” at the end of their speeches? Relax. Not a big deal.

We’re a group that is fighting for social acceptance, not legal acceptance, and that means perception is everything. Whether you like it or not, people who aren’t atheist activists just roll their eyes at us when we act like any of this is a big deal. It’s not.

Either sell it better or complain about something more worthy of your energy. Of all the ways religion and government intersect, saying “God Bless You” at the end of a speech is barely a blip on the radar.

September 8, 2012
Help Atheists Raise Money for Doctors Without Borders This Weekend
Next Post

September 8, 2012 Is There a Market for Godless Merchandise?
Browse Our Archives
What Are Your Thoughts?leave a comment