Is There a Market for Godless Merchandise? September 8, 2012 Hemant Mehta

Is There a Market for Godless Merchandise?

Karen E. Klein at Bloomberg BusinessWeek asks whether businesses that court atheist consumers have any staying power, noting that we’re nothing compared to the Christian marketplace:

Retailers who cater to evangelical Christians with items including books, apparel, gifts, and Bibles represent $4.63 billion annually, according to the Association for Christian Retail. Those who sell to nonbelievers tend to be small business owners who are true nonbelievers.

Anecdotally, anyway, I’d say she has a point. But at least one business has done pretty well…

“There are a growing number of businesses that cater to skeptics and the larger community of reason,” [JREF President D.J. Grothe] says, noting that [The Amazing Meeting] attendees make up a well-educated, well-off niche market. “This is a subculture that really is hungry and has money to play with.”

Many Americans “treat nonbelievers kind of like lepers,” says Gary Betchan, owner of EvolveFish, a $500,000, six-employee company that sells such merchandise as car emblems, bumper stickers, and jewelry that promote science and directly challenge religious belief. When he started the Colorado Springs business in 1992, he says, he was often turned down by suppliers and distributors who took offense to his product line.

EvolveFISH is an exception to the rule, though.

Most individuals I knew who post merchandise on online stores like Zazzle and CafePress might sell a lot of products, but that’s a far cry from owning your own business. Part of the problem is there are very few places to advertise your goods. Outside of conferences, atheists rarely gather in huge numbers. You can advertise online, I suppose, but I know I never click on ads on the websites I visit…

Another problem: When people buy Christian books, they can share them with their friends. When they buy Christian-themed clothing, they can wear them at church or youth group meetings. When they make popular Jesus-y music, there’s a niche market out there ready to buy albums and attend concerts.

When atheists buy godless clothing or jewelry, where are we going to wear it? Most of us aren’t attending conferences or meetups and it might be risky to wear openly godless apparel in public. There are just more obstacles to having a successful atheist business than there would be if you wanted to sell Christian goods.

It doesn’t mean there can’t be individual success, even if “atheist companies” may not thrive. If you can create something that has broad appeal — and you have some savvy marketing power to get the word out to people — there is, as DJ alluded to, a huge untapped demographic out there. 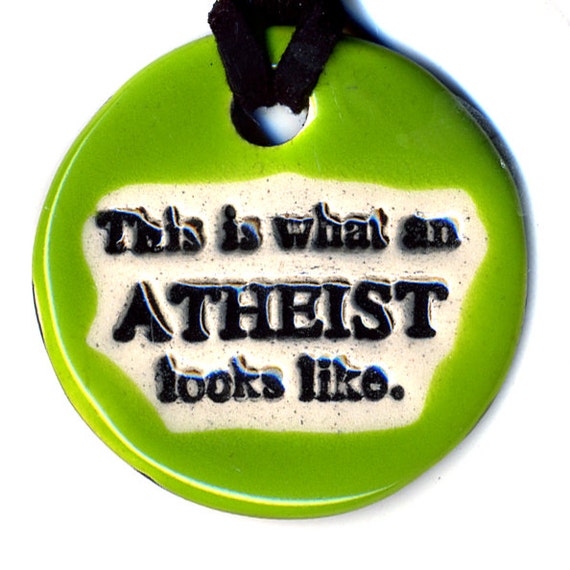 Case in point: Amy Davis Roth, through her Surly-ramics line. She has found a market for her atheist/science-themed creations, won over a lot of fans in the process, and turned her passion into a full-time job.

So, to answer Klein’s question — “Can the Godless Market Evolve Beyond Bumper Stickers? — yes it can. It won’t be anything like the massive Christian marketplace, but that’s ok. We do things on our own and we tend to like it that way.