After High School Teacher Defends Atheist and Gay Students, He Is Forced to Resign

Last February, Lenior City High School senior Krystal Myers wrote an article for the school newspaper called “No Rights: The Life of an Atheist.” The administrators refused to run it because they thought Myers’ exposing the Christian privilege in the school was too controversial. (The Knoxville News Sentinel later ran the full article on their website.)

A couple of months later, the school yearbook featured an article by Zac Mitchell called “It’s OK to be Gay.”

The administrators were unhappy about that, too. Really unhappy.

James Yoakley was at the center of both controversies. He was the school’s journalism teacher, newspaper sponsor, and yearbook advisor — and the only adult, it seems, who openly supported the students against the administration and school board. 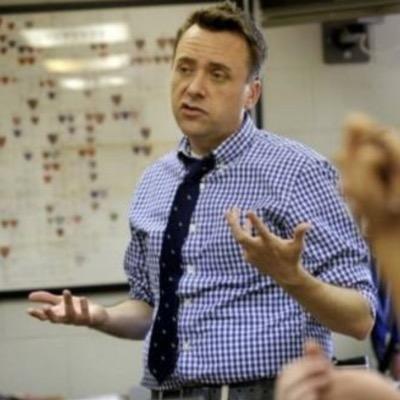 And guess what happened to him after he defended them?

“I’m fairly certain they transferred me so I would quit,” he said.

Yoakley described how, in February, he was first called into the office of the principal to discuss an article on atheism that was deemed too disruptive for the student readership.

The tipping point occurred late in April when the school yearbook that contained an article about a gay student was distributed. He said other teachers complained and opposition in the community began to grow.

“The administration didn’t talk to me for two weeks,” he said.

Shortly thereafter, the principal asked him to resign.

“He said I was improperly influencing my students,” Yoakley said.

I can’t even begin to describe how much my heart goes out to this guy.

Here he is, one of the only voices of reason in a district full of social conservatives, and he gets punished for encouraging his students to be true to who they are and not hide from that. He’s the kind of teacher you want your entire staff to model themselves after… but the administration (with pressure from the school board) wanted him to leave.

They transferred Yoakley to Lenoir City Middle School — presumably so he would just get out of the district — but Yoakley says he loves his new job. It looks like he has some support, too:

The [Student Press Law Center] has offered to help support a lawsuit and has nominated Yoakley for the “Courage in Journalism” Award. Yoakley said he has tried to avoid litigation over his demotion for fear it would hurt his chances at employment. Teachers and administrators at the middle school have been very supportive, he said.

I’m glad he’s doing better… but it’s a travesty he’s had to go through any of this.

In a Q&A with the local publication MetroPulse, Yoakley explained what he would do differently if he could do it all over:

I would insist the principal use his right to prior review. I’d never block the publication of the article. It’s student media. They decide on what’s in and what’s not. What’s interesting is that the controversy brought the article national attention. These students had their work read by a national audience. You couldn’t ask for a better education…

And then there’s this question and answer that’s so simple and yet so powerful:

What advice would you give to all the high school journalists out there?

Keep writing. Tackle difficult subjects. Know your rights. Appreciate those who stand up for you.

It’s great advice. As for that last line, Yoakley said it for a reason:

“… I know the young lady that wrote the [atheism] article is going to school. She actually sent me a message this morning saying she’s sorry she never truly thanked me for everything I did for her,” Yoakley said.

Students, if you have freedom to write whatever you think is worthy of publication at your school, thank your faculty sponsors. Yoakley’s paying the price for doing the right thing, but we need more teachers like him.

By the way… don’t bother reading the comments at the News Sentinel. Some of the commenters aren’t any more rational than the Loudon County school board members…

I would definitely not want this man teaching my child! It bothers me that they have transferred him down to middle school. Of course he would love this job cause he is now surrounded by more kids at a impressionable age.

Appears that Mr. Yoakley is using his students to propogate his own beliefs. Seems cowardly to hide behind kids. Kinda like peeking out of the closet and holding a child in front of you as a shield.

(Thanks to Christina for the link)

September 8, 2012 Pew Forum Non-Shocker: The 'Religiously Unaffiliated' Lean Democratic
Browse Our Archives
What Are Your Thoughts?leave a comment