Democrats Push God Back Into Their Platform After a Sloppy, Misguided Vote September 5, 2012 Hemant Mehta

Democrats Push God Back Into Their Platform After a Sloppy, Misguided Vote

Late Monday night, the Democratic Party released its platform. While it was great to see the inclusion of marriage equality, it was annoying to see how much faith was promoted:

Faith. Faith has always been a central part of the American story, and it has been a driving force of progress and justice throughout our history. We know that our nation, our communities, and our lives are made vastly stronger and richer by faith and the countless acts of justice and mercy it inspires. Faith-based organizations will always be critical allies in meeting the challenges that face our nation and our world — from domestic and global poverty, to climate change and human trafficking. People of faith and religious organizations do amazing work in communities across this country and the world, and we believe in lifting up and valuing that good work, and finding ways to support it where possible. We believe in constitutionally sound, evidence-based partnerships with faith-based and other non-profit organizations to serve those in need and advance our shared interests. There is no conflict between supporting faith-based institutions and respecting our Constitution, and a full commitment to both principles is essential for the continued flourishing of both faith and country.

But that’s not enough, it seems.

The Democrats have been slammed by many in their own party and (certainly) many in the GOP for not referring explicitly to God, something they did in 2008 when they mentioned the “God-given potential” of working people in the platform.

But good for them! They showed some backbone! Belief in God is a personal choice and there’s no reason to include reference to one faith or one system of belief in a platform designed to represent a large, far-from-monolithic party.

You knew it wasn’t going to last.

Just over an hour ago, the DNC haphazardly voted to change the platform to put God back in there:

The change, proposed by Ohio Gov. Ted Strickland immediately after the convention was gaveled into order on Wednesday, required a two-thirds voice vote, but was declared as adopted after three voice votes which brought delegates to their feet, shouting their yeas and nays. Democratic sources told CNN prior to the vote that it was to take place by acclamation.

What a mess… watching the video, the yeas and nays are about even. Hardly a two-thirds majority. (Admittedly, most of the Nays are probably focused on the “Jerusalem” part more than the “God” bit.) Yet, Convention chairman Antonio Villaraigosa — who seems to think the audience will easily approve the measure and is surprised when there’s vocal opposition to it — just goes ahead and approves the measure after the third vote… much to the chagrin of many in the crowd: 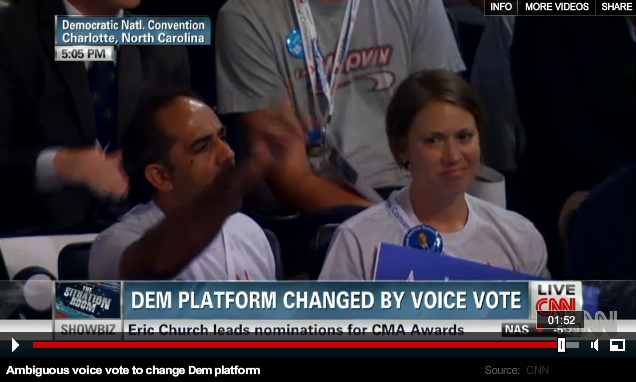 The new language about God will read like this:

We need a government that stands up for the hopes, values, and interests of working people, and gives everyone willing to work hard the chance to make the most of their God–given potential.

Just as it was with the word “faith,” the new platform implies that Democrats don’t consider atheists valued members of the party. It treats “God-given potential” as a fact instead of something we all just have to work hard to make the most of. (I also doubt it placates the religious members of the party who want a more direct reference to God but have to settle for a vague reference instead.)

It may have been a simple oversight when “God” was omitted, but it’s a mistake to put this language back in. For all the good graces the DNC earned for being so inclusive, their inability to stand up to pressure just caused them to put unnecessary, narrow language back into their platform.

***Update***: Buzzfeed has a great soundbyte from one of the delegates who voted “No”:

One dissenter, who said she hadn’t made it in to voice her “no,” said she opposed the inclusion of God.

“I think the best thing we could do is separate religion and politics,” said Barbara Herz, of Wyoming. “We should let every person make their own religious decisions and keep it out of the platform.”

***Update 2***: The Associated Press and other news outlets are reporting is reporting that the “God” and “Jerusalem” language was added at the behest of the President: