Clemson Football Player Baptized… Why Is It Such a Big Deal? September 5, 2012 Kelley Freeman

Clemson Football Player Baptized… Why Is It Such a Big Deal?

Normally I do my best to ignore what is going on in the world of Clemson University athletics at least until November (go Gamecocks!), but this article managed to catch my eye yesterday. One of their football players, junior DeAndre Hopkins, was baptized in front of his teammates recently after practice. Their wide receivers’ coach and recruiting coordinator, Jeff Scott, tweeted this picture of the event: 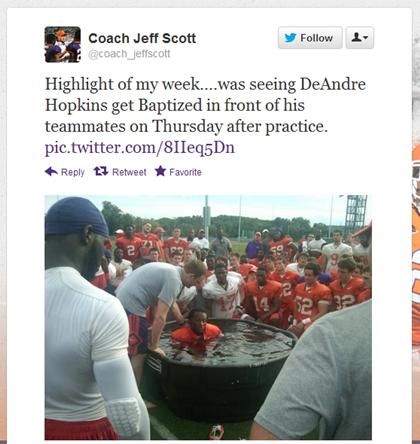 Everyone in the photo, including Hopkins, appears to still be in uniform. The article mentions that this occurred after practice, but with everyone in uniforms, it seems as if the Clemson team itself endorses this baptism.

Clemson is a public university and, while there doesn’t seem to be any legal precedence against something like this, it still makes me uneasy. Sports players are generally expected to support their teammates in any way they can and I imagine it would be very uncomfortable for an atheist that plays for Clemson to speak out against anything like this.

Hopkins is welcome to be baptized and be a faithful member of the religious community, but I don’t think that this is the appropriate venue. A football team is not a Bible study.

Scott received a lot of praise on Twitter for his support of Hopkins: 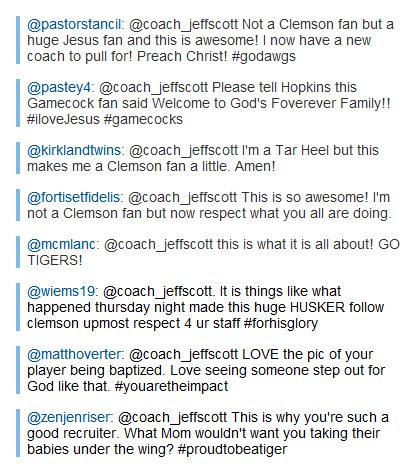 Dirk Gadsen, president of the Secular Student Alliance at Clemson, had this to say:

The holding of a Christian baptism at a state-owned facility by what appears to be a state employee is an affront to the secular values on which this nation is founded. Through his actions, Jeff Scott — a coach at Clemson University — the Clemson football program, and Clemson University as a whole are effectively endorsing Christianity. As both a tuition-paying Clemson student and tax-paying resident of South Carolina, I find this action extremely insulting. This is disrespectful to both the non-Christian members of the Clemson community and the residents of this great state. The Secular Student Alliance of Clemson condemns this state-supported baptism as an affront to the 1st Amendment to the United States Constitution.

Scott is welcome to believe what he’d like, but he is acting as a representative of Clemson University. It was held at a practice field on Clemson’s campus, which is state-owned and operated.

If nothing else, why is the baptism itself newsworthy? What made it important enough to be picked up by USA Today?