Atheists Will Protest at the DNC Later Today

The Charlotte Atheists and Agnostics will be holding a protest near the Democratic National Convention later tonight about the need for church/state separation in our government: 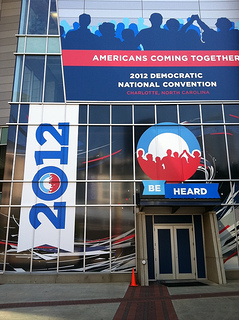 The protest will be held September 4, 2012, from 6:00 p.m. – 6:30 p.m. at the Speakers Platform on the corner of Stonewall Street and Caldwell Street in Charlotte, North Carolina.

The protest will include speakers from the CAA discussing the necessity of the separation of religion and government in the United States.

This event is centered around the need for separation of religion and government. There is a need, even at the DNC, to make our voices heard in opposition to the overwhelming influence of religion in our political system.

There are some obvious questions coming up: Why protest at the DNC? Aren’t Democrats usually better about church/state separation issues than Republicans? Wouldn’t a protest have been more effective at the RNC?

The answers are pretty simple: Local groups organize the protests. The CAA is based in Charlotte, where the DNC is taking place, so they’re protesting there.

Yes, Democrats are better than Republicans in this regard, but they’re not great. President Obama has expanded the Office of Faith-based and Neighborhood Partnerships. There are too many religious exemptions in the healthcare bill. Obama and many members of Congress attend/host Prayer Breakfasts. There’s plenty to protest.

And I would agree that a protest at the RNC would have been great, too, but local atheists didn’t get their act together in time to make it happen.

Hopefully, this will be more educational than argumentative. We don’t need to alienate the people who are more sympathetic to our side, but they need to be made aware that we are watching what they do when it comes to First Amendment issues and we’re not going to take any violations lightly.

September 4, 2012 Antrim Township Supervisors Begin Meeting with Christian Prayer
Browse Our Archives
What Are Your Thoughts?leave a comment