A billboard featuring President Obama and a Biblical reference is getting investigated by the Secret Service: 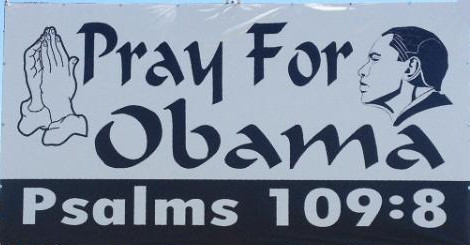 Milton Neitsch, Jr. of Victoria, Texas put up a billboard (in accusatory “Arabic”-y font) saying “Pray for Obama” and “Psalms 109:8” because the verse in question says this:

Let his days be few; and let another take his office.

Neitsch must have been thinking: Let’s make Obama a one-term president! (Also, he’s a secret Muslim!)

What Neitsch didn’t pick up on was how the verse looks in context. In fact, the chapter in question refers to “wicked men” and says this (Psalms 109:7-13):

7 When he shall be judged, let him be condemned: and let his prayer become sin.

8 Let his days be few; and let another take his office.

9 Let his children be fatherless, and his wife a widow.

10 Let his children be continually vagabonds, and beg: let them seek their bread also out of their desolate places.

11 Let the extortioner catch all that he hath; and let the strangers spoil his labour.

12 Let there be none to extend mercy unto him: neither let there be any to favour his fatherless children.

13 Let his posterity be cut off; and in the generation following let their name be blotted out.

That’s… pleasant. Believe it or not, the Bible wasn’t referring to a one-term American presidency. (Shocking, I know.) It was talking about killing people.

Neitsch doesn’t seem to get the gravity of all this. He must be so used to taking Bible verses out of context to make whatever point he wants that he’s completely unaware how their meanings can change depending on the surrounding verses. Thankfully, most other people have a skill that allows them to read more than one sentence at a time.

Even though Neitsch has agreed to change the sign, he’s not helping his own cause:

When asked what the sign means, Neitsch responded, “Exactly what it says. Hope he’s gone soon and somebody different takes his place.”

September 1, 2012
Why Mitt Romney Won't Talk About His Faith
Next Post