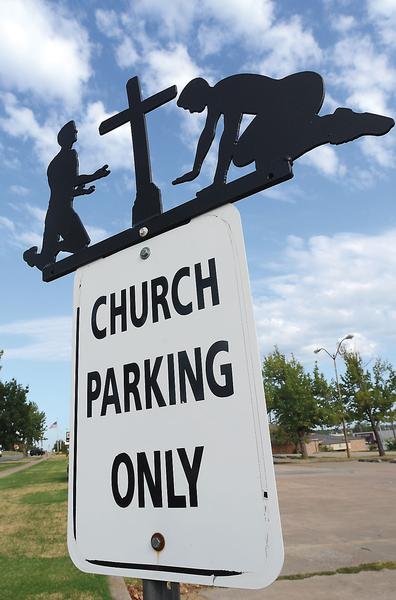 In fact there are about 150 of those silhouettes atop street signs in the city — illegal government endorsements of Christianity, all of them.

To their credit, the McAlester City Council is considering taking pre-emptive action and removing the silhouettes before a lawsuit comes their way. It’d be a smart move on their part.

The residents, who don’t seem to care about how their tax money is wasted, are not taking it very lightly:

Roughly 150 people showed up at the McAlester city council meeting Tuesday night, filling council chambers and two overflow rooms. Almost all of them demanded the silhouettes with crosses be put back up. A petition with more than 1800 signatures was also presented to the council in support of the silhouettes.

Ninety-nine percent of the people here are Christian,” James Prince, Chairman of the Gaines Creek Association of Oklahoma Free Will Baptists, said. “We’re just tired of being pushed around.”

Prince said his group, like many other Christians, want to preserve a Christian way of life in the area.

“This country was built by Judeo-Christians,” [Prince] said. “And we intend to bring that back.”

City manager Pete Stasiak said the city attorney has been very clear: the silhouettes endorse a specific religion and that is unconstitutional.

“Nobody has come forward at this point and talked about a lawsuit,” Stasiak said.

But they could. And such lawsuits can get very expensive for a city.

That is the power of groups like the Freedom From Religion Foundation. That is the Broken Window Theory in action: The simple threat of being sued may be enough to fix the problem.

The city council will revisit this issue at their next meeting on September 11th. It’d be great to see some support for the church/state separation side.

On a side note, I don’t know why the Christian spokespeople in the area aren’t just more honest about their intentions. Instead of worrying about these silhouettes, let’s see them fight to put up signs in City Hall reading “Jews not wanted.” That seems to be the gist of what they want, anyway. It’s a place for them and only them. Down with Muslims, atheists, Buddhists, Christians who don’t attend their church, and everyone else not like them, right?

(Thanks to Kimberly for the link!)

August 29, 2012
The Creation Museum Responds to Bill Nye the Science Guy
Next Post

August 30, 2012 National Atheist Party Cancels 2012 Convention
Browse Our Archives
What Are Your Thoughts?leave a comment