Friar Claims That ‘the Youngster Is the Seducer’ When Priests Rape Kids August 30, 2012 Jessica Bluemke

Ah, victim blaming.  The age-old technique to allow rapists and molesters to shirk off responsibility for their actions.

We hear a lot of this in regards to cases of “legitimate rape” (as it is so sweetly referred to by old idiotic men) when the woman was clearly asking for it… You know how it sounds: “Did you see how short her skirt was? She totally wanted it” or “I could literally see her whole arm.  What did she expect, wearing a tank-top into public?”

So call me naive, but I wasn’t expecting anyone to be so deluded, so utterly heartless, so cruel as to blame children for being raped and molested by men who are supposed to their moral leaders. It’s disgusting and utterly disheartening.

Father Benedict Groeschel was being interviewed by the National Catholic Register (the link to the original article  should be here, but it appears to have been taken down) about his conservative breakaway order, Franciscan Friars of the Renewal, when the conversation turned to Catholic  priests and their nasty little habit of raping kids. 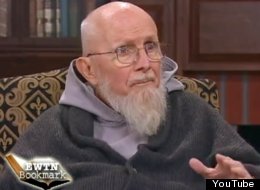 Just read what he has to say:

People have this picture in their minds of a person planning to — a psychopath. But that’s not the case. Suppose you have a man having a nervous breakdown, and a youngster comes after him. A lot of the cases, the youngster — 14, 16, 18 — is the seducer.

… okay. So even giving Groeschel the benefit of the doubt, assuming that 14-year-old girls are attempting to seduce priests, this justifies old men having sex with tweens how?  They are still the authority figures there.  It should still be obvious that they shouldn’t have sex with children.  Yeah, they should do charity and help people and try to be leaders in their community, but first and foremost, they should spend every hour of every day not raping kids.

Pressed for clarification, the New York State-based religious leader explained that kids looking for father figures might be drawn to priests to fill a hole.

Furthermore, Groeschel expressed a belief that most of these “relationships” are heterosexual in nature, and that historically sexual relationships between men and boys have not been thought of as crimes.

“If you go back 10 or 15 years ago with different sexual difficulties — except for rape or violence — it was very rarely brought as a civil crime. Nobody thought of it that way… And I’m inclined to think, on [a priest’s] first offense, they should not go to jail because their intention was not committing a crime.“

“Their intention was not committing a crime”?  Are you all of the way outside of your entire brain?  Have you heard of things like “unintentional manslaughter”?  What is your problem?  “On a priest’s first offense, they should not go to jail”?!  You actually think that just because he only raped one kid (that we are aware of), a priest should literally get a “Get Out Of Jail Free” card?  “Well if you force yourself on another youngster, then we’ll start talking about consequences of your actions.”

I don’t think I can even address the whole “heterosexual relationships and relationships between men and boys aren’t really a crime” because it doesn’t make a lick of sense.

It’s beyond me why these child-molesting priests don’t get thrown right under the bus by Catholic leaders.  Why don’t they say, “Yeah, those guys are the worst, amirite?” and at least attempt to separate themselves from the situation?

What do you guys think?  Do they really believe that priests molesting young children (boys or girls) isn’t that bad or isn’t the fault of the molester?  Does this guy speak for Catholic leaders everywhere?  Or are they just trying to downplay the situation?

Most importantly, why is this kind of rhetoric still floating around? Why haven’t people condemned these men and the Catholic Church en masse? What the hell is going on, here?!

August 30, 2012
Why Don't More Atheists Speak Out Against Islamophobia?
Next Post