Getting Engaged for Marriage Equality

Right now, in this crucial moment in time, we have the opportunity to make history happen. In every state that marriage equality has gone to the voters, the opposition has used dishonest, misleading tactics to persuade voters to vote against allowing same-sex marriage. Groups like the National Organization for Marriage have build a very successful political machine that knows exactly how to play on people’s fears and spread blatant misinformation about what marriage equality means. They raise money like it’s nothing, spending millions without hesitation in state after state.

But this November, Washington State has the opportunity to break that streak.

There is no secular reason to oppose marriage equality. The only opposition to same-sex marriage comes from these religious fundamentalists who want to codify their religious definition of marriage into law. They want to deny other theistic institutions their freedom to marry loving, committed same-sex couples, thus denying them their freedom of religion. This is clearly a separation of church & state issue. 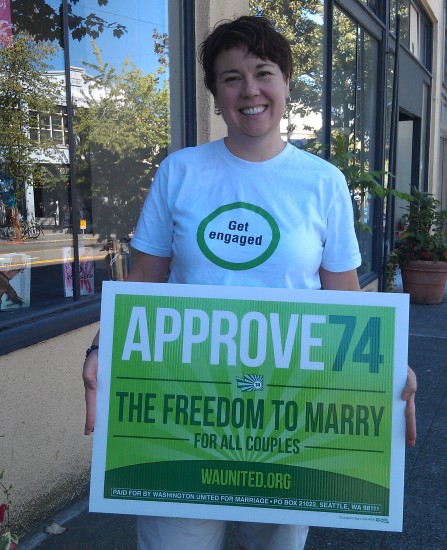 But it’s also a human issue. Meet Colleen. Colleen is awesome. She took a leave of absence from her job and has been working as a volunteer coordinator for Washington United for Marriage since June. She typically puts in about 60 hours a week.

And why is she this crazy? Because she doesn’t just want to be married according to Canada’s laws; she wants to get marriage to her wife in her home state of Washington. She wants their son to grow up feeling like his family is just as legitimate and stable as every other family in their neighborhood. The day this picture was taken, she had forgone a trip to the aquarium with her wife and son so that she could be with me and six other new volunteer recruits for our morning orientation. She is so devoted to making sure that Referendum 74 is approved in November that she’s willing to give up so much of her time, energy and sanity to train every volunteer she can.

Fortunately, the rest of us don’t have to be quite so insane to make sure Ref. 74 is approved. If you live in Washington State, there are oodles of ways you can make a difference right now:

We’ll win this fight by connecting with people and getting them engaged for marriage equality. And we have to get engaged or else the fundamentalists will win again.

August 27, 2012
Michele Bachmann Spies with Her Little Eye... 'a Spiritual Hurricane'!
Next Post

August 28, 2012 They're Writing About Jesus and Paying for Fake Five-Star Reviews on Amazon
Browse Our Archives
What Are Your Thoughts?leave a comment