Another Christian Cross on Public Property, but the AHA is Fighting Back August 27, 2012 Hemant Mehta

Another Christian Cross on Public Property, but the AHA is Fighting Back

In Bladensburg, Maryland, there sits a World War I memorial called “Peace Cross.” It’s a 40-foot cross on public property, maintained by the Maryland National Capital Park and Planning Commission. 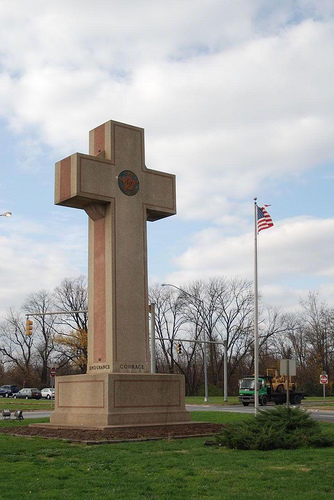 The American Humanist Association is asking the Commission to remove the Christian symbol:

“The cross is a Christian symbol, and government should not be in the business of promoting religion. When government oversteps its bounds, as in this case, it sends a negative message to those who don’t hold Christian beliefs,” said American Humanist Association Executive Director Roy Speckhardt. “A war memorial should be inclusive and recognize everyone’s service and sacrifice. We owe it to our veterans to replace this memorial with something more appropriate and universal.”

“This cross amounts to an unconstitutional government endorsement of Christianity on public land,” said Bill Burgess, attorney and legal coordinator of the American Humanist Association’s Appignani Humanist Legal Center. “It is an exclusively Christian symbol that does not represent the sacrifice of non-Christian soldiers. Its prominent presence on public land leaves any observer with the notion that Christianity is exclusively favored and promoted by the government.”

The AHA points out they mean no disrespect to the soldiers who fought in the war:

This letter should not in any way be misread to imply that those who support the separation of church and state in general, or AHA in particular, seek in any way to diminish the sacrifice of the soldiers whose names are listed on the plaque on the base on which the Bladensburg cross sits. It does them, and us all, a great disservice, however, to conflate patriotism and religion. A Christian cross does not represent all of the war dead; it is not the marker chosen by Jews, Hindus, Muslims or Buddhists, nor by atheists, agnostics, humanists or other nonbelievers. A cross is an inherently Christian symbol. The state cannot choose it to stand for all of the fallen. To do so is to denigrate the service of those who have not chosen that religion, relegating them to second class citizen status.5 It sends the message to those who see it that the government sees only those citizens who are Christian as mattering, when, of course, that is simply false.6 When the state prefers Christianity in this way, it not only betrays those of its citizens who are not Christian, it violates the separation of church and state, a value held dear by the founders of our nation and enshrined as a fundamental right in the Constitution they drafted.

Earlier this summer, the San Diego-based Mount Soledad Cross was found to be unconstitutional so there’s precedent for this case.

Let’s hope the Commission understands that before they waste taxpayer money to fight a battle they deserve to lose.

August 27, 2012
Ask Richard: Pakistani Longs to Live Openly as an Atheist
Next Post