What if the Austin City Seal Didn’t Have a Cross On It…?

Yesterday, Hemant posted a story about how Joe Zamecki was fighting against the city seal of Austin, Texas — which features a cross on it:

Some of the commenters — both Christians and atheists — don’t seem to think this is a big deal. Some of the Christians say this isn’t government endorsement of religion, it’s just a part of the city’s history.

Some atheists have commented that this is not a battle worth fighting and that Joe Zamecki should pick a more important battle.

My question to the Christians is this: Would they react the same way if the seal looked like any of these:

My guess is that any one of those seals would upset many Christians. And yet, when it’s their cross on the seal, they remain silent or opposed to any attempt to change it. I ask Christians to consider that efforts to keep religion out of government both in symbol and in substance are protecting their religious freedom.

I also have a question for the atheists who say this is not an important issue: Would the battle be worth fighting if the seal looked like this? 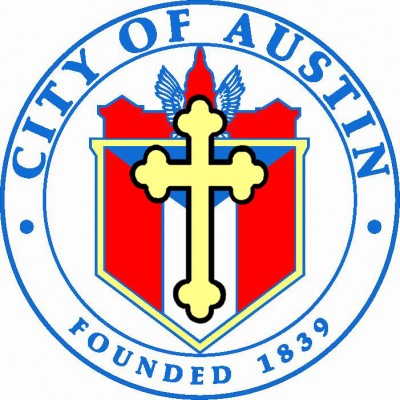 The cross on the original seal is small. It’s human nature to not be alarmed by small things. How big would the cross need to be to become a statement that says, “This is a Christian city and non-Christians are second-class citizens”?

I’m not suggesting that, if left alone, the cross will grow bigger on the seal. My point is: pernicious religious influence in government is growing bigger, not just in its symbols, but in laws, policy, and presumptive attitudes. How big does it all have to get to finally trigger your alarms?

I’ve heard people object to the “slippery slope fallacy” when someone suggests that a small problem can grow into a big problem. I think that objection is sometimes used as a rationalization for apathy and inaction. Yes, not all small problems will grow big, but fires can, tumors can, leaks in dams can, and political ideologies can.

Consider that small fires, tumors, and leaks are easier to stop than big ones. Consider that the battle that Joe Zamecki has picked will be easier to win now rather than later. Consider that he’s fighting this small battle now so that you won’t have to fight a bigger one later.

If it’s still not a battle you would pick — if you still won’t support him — at least don’t discourage him.