No, Daniel Sarewitz, Science Does Not Have To Give Way to Religion August 25, 2012 chanam

No, Daniel Sarewitz, Science Does Not Have To Give Way to Religion

Exhibit A: Sometimes Science Must Give Way to Religion, a column appearing in the latest issue of the journal Nature.

Daniel Sarewitz, a graduate of Cornell’s geological sciences PhD program, begins by contemplating the deep similarities between religion and science as he mulls over the Higgs boson on a trip to the Angkor temples in Cambodia:

The Higgs, of course, has been labelled the “god particle” because it accounts for the existence of mass in the Universe. But the term (coined by physics Nobel laureate Leon Lederman, perhaps to the regret of some of his colleagues) also signals the ambition of science, or at least of certain branches of physics, to probe the origins and meaning of existence itself — which, to some, is the job of religion. Science may seek a theoretically and empirically sound explanation of such origins and religion may not. But this distinction is less clear than it seems.

It’s a common rhetorical tactic in pieces like this to characterize scientists who are sympathetic to religion as the victimized minority, subject to discrimination and dismissal by their colleagues. But Leon Lederman originally wanted to call the popular science book which gave rise to the particle’s moniker “The Goddamn Particle” for its penchant for avoiding capture and incurring expense. How does that square with Sarewitz’s earnest attempt to blend science and religion?

Furthermore, the other reason Lederman gave for his title was that the particle is “so central to the state of physics today, so crucial to our final understanding of the structure of matter, yet so elusive.” In a sense, Lederman is replacing God with the particle by defining the Higgs boson with designations usually reserved for the divine. If providing the vital underpinning of the universe that makes existence as we know it possible is the job of a particle, why bother with god to explain mass and gravity?

Of course, other definitions of God exist, which give him/her/it different roles, but Sarewitz is taking the God of the Gaps idea and flipping it around, arguing that by the mere fact of science’s answering questions that religion also tries to answer, it is fundamentally like religion.

If that’s true, though, then one could easily say “But the term abiogenesis means ‘the beginning of life’… since that evokes the Bible’s first words, it must signal the ambition of science (or at least of certain branches of biology) to probe the origins and meaning of life itself — which, to some, is the job of religion.” Religion was once used to explain everything about the world, natural and supernatural alike. Can science investigate anything then without being accused of treading on religion’s turf? It’s really not the fault of the scientific method that Francis Bacon was born somewhat after the pre-historic Jane “floods mean the gods are mad at us” Doe.

The overwhelming scale of the [Angkor] temples, their architectural complexity, intricate and evocative ornamentation and natural setting combine to form a powerful sense of mystery and transcendence, of the fertility of the human imagination and ambition in a Universe whose enormity and logic evade comprehension.

Science is supposed to challenge this type of quasi-mystical subjective experience, to provide an antidote to it.

This is where I marvel at the fact that Sarewitz has become a scientist despite his narrow and uninspired view of science. Why would scientists ever go to work in the morning if they did not feel a sense of awe and beauty in the world they are exploring? Why would non-scientists stay up until the wee hours of the morning to watch a car land on Mars if it weren’t really freaking cool? Why would Neil deGrasse Tyson be a celebrity if the immensity of space and the known universe did not simultaneously terrify and enthrall us? (Besides the fact that he’s such a boss).

The difference between scientists and the priests of the Angkor temples is that scientists do not worship their own ignorance; they seek to conquer it. They take joy in the merely real. They see in truth more grace than in blindness.

Certainly, for those who believe in God, God is Truth. But Sarewitz wants us to be inspired by a universe which evades comprehension instead of one which we have the unimaginable luck to seek to understand. He thereby mischaracterizes the goal of both science and religion in one fell swoop.

That such scientific understanding [for a rational explanation for the universe] provides a challenge to religion is an idea commonly heard from defenders of science, especially those in more militant atheist garb. Yet scientists who occupy that ground are often too slow to recognize the irrational bases of their own beliefs, and too quick to draw a line between the scientific and the irrational. Take, for example, how we come to know what science discovers. Most people, including most scientists, can acquire knowledge of the Higgs only through the metaphors and analogies that physicists and science writers use to try to explain phenomena that can only truly be characterized mathematically.

Ah! The hugely sophisticated gratuitous-but-obligatory jab at “militant atheists” who think that God being an unnecessary explanatory factor might make his existence less likely. Awesome. But even worse than that, Sarewitz is making an equivalence between religious people who claim that God is the ultimate answer to all of our questions about the universe and scientists who use metaphor to understand parts of the universe which are almost queerer than we can suppose. The difference, which appears to elude Sarewitz, is that scientists don’t believe their metaphors are true. They believe that they are useful.

If you find the idea of a cosmic molasses [the metaphor used by the New York Times] that imparts mass to invisible elementary particles more convincing than a sea of milk [a concept in Hindu cosmology] that imparts immortality to the Hindu gods, then surely it’s not because one image is inherently more credible and more “scientific” than the other. Both images sound a bit ridiculous. But people raised to believe that physicists are more reliable than Hindu priests will prefer molasses to milk. For those who cannot follow the mathematics, belief in the Higgs is an act of faith, not of rationality. 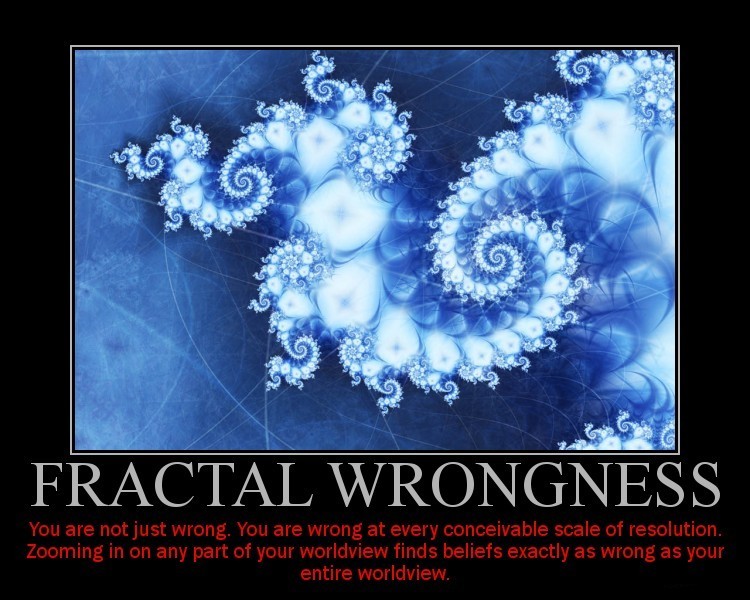 Wrong. Wrong on all levels. The question of whether physicists are more reliable than Hindu priests on questions pertaining to physics is not a matter of inherited societal judgment. It is a rational assessment of the kind of tests and requirements in place to ascertain someone’s knowledge of advanced physics. If rationality meant figuring out everything yourself, we’d never learn anything. Rationality means an expert opinion should adjust your probability estimates for something being true, or there would be no point in having experts. It is certainly more rational for laypeople to trust physicists, who do understand the mathematics, than for them to trust Hindu cosmology, which did not correctly predict the existence of a subatomic particle 40 years in advance of its discovery, or Daniel Sarewitz, who doesn’t understand rationality.

Science advocates have been keen to claim that the Higgs discovery is important for everyone. Yet in practical terms, the Higgs is an incomprehensible abstraction, a partial solution to an extraordinarily rarified and perhaps always-incomplete intellectual puzzle. By contrast, the Angkor temples demonstrate how religion can offer an authentic personal encounter with the unknown. At Angkor, the genius of a long-vanished civilization, expressed across the centuries through its monuments, allows visitors to connect with things that lie beyond their knowing in a way that no journalistic or popular scientific account of the Higgs boson can.

That just means that religion has a better public relations team than science. It doesn’t make it more true. And there’s no reason, as I said above, why science can’t be just as beautiful and inspiring.

Why does this matter? Challenges to the cultural and political authority of science continue to rise from both ideological and religious directions. It is tempting to dismiss these as manifestations of ignorance or scientific illiteracy. But I believe instead that they help to show us why it will always be necessary to have ways of understanding our world beyond the scientifically rational.

I am an atheist, and I fully recognize science’s indispensable role in advancing human prospects in ways both abstract and tangible. Yet, whereas the Higgs discovery gives me no access to insight about the mystery of existence, a walk through the magnificent temples of Angkor offers a glimpse of the unknowable and the inexplicable beyond the world of our experience.

Riiiiiight. I’m sure Todd Akin’s dangerously poor understanding of human biology, Republican denial of accepted climate science, and — unbelievably — the still-present support for evidenceless abstinence-only sex education comes from science’s lack of awe, rather than politically-motivated reasoning and a misunderstanding of the nature and goals of science. A misunderstanding, I must note, that this article only deepens.

Religion may have succeeded at being beautiful, in some sense. I’ve written before that it gives me that sense of awe. But science’s goal is not to be beautiful; it is to be true. Wonderfully, it manages to accomplish both. Science popularizers, science bloggers, and science writers have all begun a path (one, I might add, religion had a four thousand year headstart on) that will lead to sharing that beauty with all of humanity.

Before you claim that science is incapable of providing the wonder that religion does, give it a chance to get its pants on.

August 25, 2012 FOX News Should Fix This Headline
Browse Our Archives
What Are Your Thoughts?leave a comment