West Point cadets scheduled to graduate in 2013 have been presented a survey of their leadership traits every year since 2009. That doesn’t sound bad… until you realize the survey includes promotion of spirituality, religion, and faith without accommodation for the nontheist perspective.

The Commandant of Cadets distributed the survey with these instructions:

“You have been part of a 4-year study to determine the effect of the West Point Experience on development as a Leader of Character… seeking your responses and insights in matters addressing values, moral reasoning, and knowledge of our Army Professional Ethic.”

While more than 90% of the questions were secular in nature, the following subset of character traits has set back more recent openness to Humanists and other nontheists at the Academy:

I am a spiritual person.

I practice my religion.

My faith never deserts me during hard times.

My faith makes me who I am. 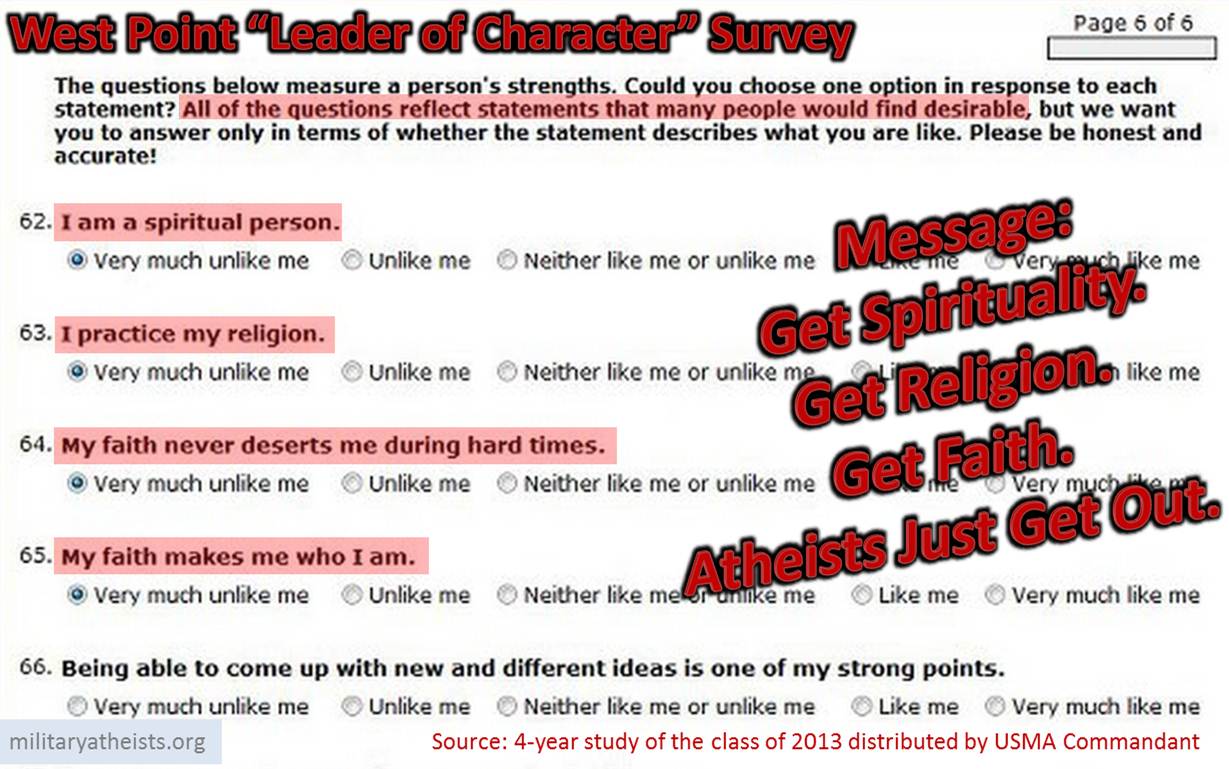 In answering these questions, the options range from “Very much unlike me” to “Very much like me” and come with the encouragement to be “honest and accurate.” These questions are more extreme than the Army’s version (the “Soldier Fitness Tracker”), which didn’t directly reference religion or faith yet still led to widespread protests spearheaded by Justin Griffith of Rock Beyond Belief.

This sort of response is what the Academy should expect when it provides no recognition or accommodation for those who do not identify with spirituality, faith, or traditional religious terminology.

It is unconstitutional for the Academy to dictate that its cadets be spiritual, practice religion, or define themselves by their faith, as the survey suggests. The Academy should encourage cadets to explore their beliefs in order to build a strong foundation of personal values for the Army’s professional values. By promoting a faith-based approach, the Academy is impeding character development and driving a religious wedge in the military team.

As I said, this study was created in 2009. More recently, West Point and other Academies have expanded their recognition of atheists and humanists. With support from the Military Association of Atheists & Freethinkers (MAAF) and the Secular Student Alliance, student groups of Humanists, atheists, freethinkers, and other nontheists have come together. Alternatives to church have been provided at each Academy in each of the last two years. I was even invited to the 2011 West Point Diversity Conference and the 2010 US Air Force Academy Religious Respect Conference in my capacity as head of MAAF, and I visited the Naval Academy Freethinkers and Atheists in 2012. Each of the service academies is considering official recognition for nontheist student groups so that they can, for the first time, be recognized, funded, and provided with the privileges and support that other groups (religious, academic, and secular) have enjoyed for years.

Unfortunately, this survey is still in progress. But how will these data be used?

If more people say they are spiritual, religious, or faithful, will that be evidence that the Academy has a proselytizing atmosphere that pushes cadets into traditional religious views?

Will a declining number be used to justify extra funding for a chaplaincy that continues to stifle humanist identity and reject humanist leaders?

The survey includes the instruction that “all of the questions reflect statements that many people would find desirable,” which is true since most people are religious. But the survey does not account for those who disagree categorically with the questions — and that group is growing throughout the US. The problem now is that the survey’s results are useless because they provided no accounting for nontheist beliefs.

Translating traditional religious values and practices is a difficult activity, and Joseph Hammer, Ryan Cragun, and colleagues at the Center for Atheist Research are studying military efforts to promote and gauge spirituality. They are collecting data on the effects of questions and the ability of studies to gauge well-being. Outreach to the Army’s Comprehensive Soldier Fitness Office by nontheist groups has been rejected. This trend of promoting spirituality without reference to the nontheist community has continued to spread throughout the military.

West Point, the Army, and the military as a whole should review studies like this and make efforts to account for their growing nontheist population. Values, character, meaning, and well-being also apply to atheists, humanists, and others with a naturalistic world view, even if we approach those topics differently.

The military would benefit from understanding the diversity of belief within the ranks.

August 22, 2012
We're Not on Opposite Sides of the Spectrum
Next Post