Obama and Romney Get Warm and Fuzzy over Faith August 22, 2012 Paul Fidalgo

Obama and Romney Get Warm and Fuzzy over Faith 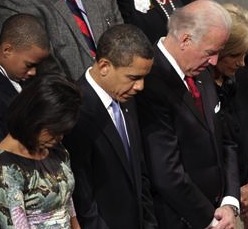 Cathedral Age has just published a dual Q&A (PDF) with President Obama and Mitt Romney, asking each the same set of questions about their faith and its role in public policy. Their answers will surely not shock you, but they are illuminating in some ways.

For example, the President talks about religious belief as engendering compassion for our fellow humans:

For me, and I think for many other Americans, faith tells us that there is something about this world that ties our interest to the welfare of a child who can’t get the health care they need, or a parent who can’t find work after the plant shut down, or a family going hungry.

He doesn’t say that the nonreligious do not find compassion within themselves (how could he, since his own parents were mostly nonreligious), but rather turns it around against opponents of an activist government, implying that their lack of concern for such things suggests a lack of faith. Clever.

(In case you’re wondering, nonbelievers are never mentioned in this entire interview by either candidate.)

Funnily enough, Romney, answering the very same question (about faith’s role in public life) rattles off a laundry list of things that make atheists’ heads explode, but does not touch on notions of fellow-feeling:

We should acknowledge the Creator, as did the Founders—in ceremony and word. He should remain on our currency, in our pledge, in the teaching of our history, and during the holiday season, nativity scenes and menorahs should be welcome in our public places. Our greatness would not long endure without judges who respect the foundation of faith upon which our Constitution rests.

Romney is, however, capable of saying things that we can all pretty much get behind. When asked what a person’s faith says about them, Romney avoids declaring that one must be religious to possess “Americanness”:

. . . so much depends on deeds, not words. Perhaps the most important question to ask a person of faith who seeks a political office is whether he or she shares these American values: the equality of humankind, the obligation to serve one another, and a steadfast commitment to liberty. They are not unique to any one denomination. They belong to the great moral inheritance we hold in common.

Obama is more succinct on this point:

I think it is important that we not make faith alone a barometer of a person’s worth, value, or character.

Those looking for more clarity from the president on his disappointing bolstering of Faith-Based Initiatives will not find it here — his answers show he is clearly pleased with how it’s all working — and Romney takes the opportunity to lament the nonexistent problem of God going unacknowledged in public life, trotting out this old canard:

The Founders proscribed the establishment of a state religion, but they did not countenance the elimination of religion from the public square. We are a nation “under God,” and in God, we do indeed trust.

Are you done rolling your eyes? Cool.

Like I said, no surprises here, and the entire piece has a similar tone to the Rick Warren ring-kissing that Obama and John McCain engaged in last time around: General piety, a warm fuzziness about belief in general, both implicit and explicit assertions that faith is central to the American experiment (if not a prerequisite for taking part in it) and no knocks made by either man against folks of the “wrong” kind of religion or of none.

That final point, I should note, stands in contrast to Romney’s 2007 “Mormon speech,” the address he gave (somewhat aping John F. Kennedy) to put to rest any discomfort about his Mormonism. In that speech, Romney did, in fact, exclude atheists from this Great Big Thing We Call America, when he said:

So keep that in mind, oh ye who must not be free.

August 22, 2012
Are Atheists Being Stingy When It Comes to Charity?
Next Post