ESPN loves shows featuring talking heads. They’ll invite columnists with personalities to talk about any sports-related topic and the worst sin they can commit is being boring.

On Friday, one of their regulars, Skip Bayless, was eager to talk about this picture from GQ featuring a Jesus-like Tim Tebow:

Bayless tweeted this in advance of his TV spot: 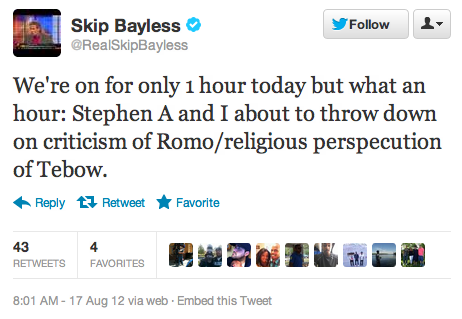 Religious persecution? Really? I’m sure it might upset some Christians… but it’s not like Tebow was magically photoshopped in the image. He posed for it. How is that persecution?

That appeared to be Stephen A. Smith‘s position, too, when he debated Bayless on the topic on ESPN2’s First Take:

If you watch that video, you may have noticed how Bayless got cut off twice (at 0:58 and 2:43). He made his point very clearly, but commercials interrupted him on two separate occasions.

Now, some are crying censorship on the part of ESPN.

I don’t buy it. ESPN wants that conversation to happen. They love debate. The last thing they’d want to do is cut away from a serious, possibly-substantive argument. Seems like a production error was made somewhere along the line (possibly even locally wherever this YouTube-r lived).

Ultimately, Bayless got to make his (silly) point and Smith rebutted it.

It doesn’t even seem like Bayless noticed he was temporarily off the air since he just tweeted his thoughts later as if nothing happened: 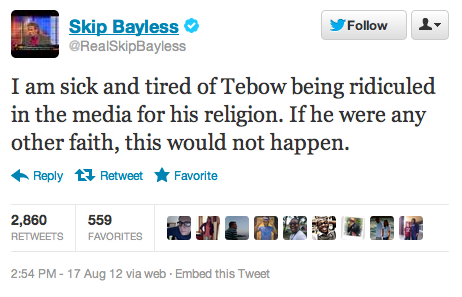 It’s (again) a ridiculous argument to make. There are lots of Christian athletes in the NFL. But Tebow wears his faith on his sleeve (or his wristband) as if he’s more interesting in winning converts than games. That makes it fair game for criticism.

Of course, touting his faith has hardly been a bad thing for him. Christians love him even more for doing it and Tebow’s suffered no real penalties for broadcasting his faith.

If he were Muslim or an atheist and did the same things, I doubt he’d get away with any of this.

(Thanks to Eric for the link!)