Is This Math Book Bad for Girls?

Danica McKellar (who portrayed Winnie Cooper on The Wonder Years) has written her fourth book aiming to make math more accessible for young women. That’s made her both a bestselling author… and one of the more controversial figures in the math education world, given the Cosmo-like feel to her books.

Her latest one is called Girls Get Curves: Geometry Takes Shape: 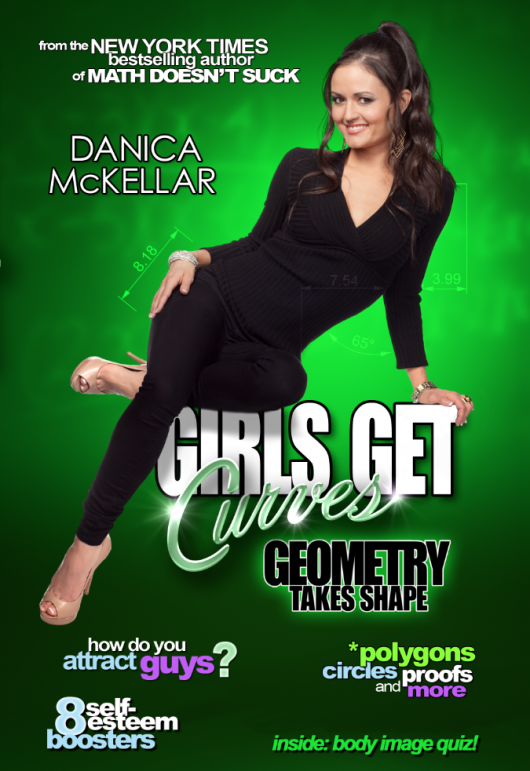 Which leads to the obvious question (which McKellar has been asked 3298423942 times over the past few years): Are these books helpful or harmful?

McKellar justifies the decision by saying she’s just trying to reach the girls where they’re already at. And if the current crop of books about math aren’t working for that demographic, why not try something else?

It’s easy to dismiss the books for just reinforcing existing stereotypes… but considering how so many other approaches haven’t worked, I’m less concerned about the sexism angle than I am about the math angle (no pun intended). If they get young women excited about algebra and geometry, then more power to them. Based on the sales and reviews, the books are clearly working.

Personally, I prefer Vi Hart to McKellar when it comes to making math accessible to younger people, but if anyone disagrees, does it really matter?

When I met Jennifer Ouellette, who wrote the very-non-Cosmo-like book The Calculus Diaries, I asked her what she thought of McKellar’s books. To my surprise, she really liked them, too:

I love [Danica McKellar’s] books. I know she’s been critiqued for “pinkifying” math, and I get that, but I think that there are girls who are pink. I have a niece who’s pink. I also have a niece who’s goth. So I think Danica is targeting an audience, a demographic, of girls who like those things. They’re girly girls. And she can speak to them and make math relevant to them in a way that most of us cannot.

I can make it relevant to Buffy fans and to people who dig zombies. So the goth group is my group… I think [Danica’s] doing something very, very important. I think you need to look at who the target audiences are for [my own] book because no one book is going to serve every need.

No doubt some of you are going to criticize McKellar’s books in the comments section. If you do, though, I’d love to hear your alternative suggestions for how to get young women (or anyone, really) interested in the subject.

August 18, 2012 Atheists Have to Address the Social and Emotional Needs of People (or the Church Wins)
Browse Our Archives
What Are Your Thoughts?leave a comment