Mitt Romney Might Not Be On the Washington State Ballot In November August 16, 2012 Ericka M. Johnson

Due to technicalities in Washington State law, American’s most famous Mormon, Mitt Romney, may not be on the ballot in the state come November because the Republican Party doesn’t currently qualify as a “major party” any more. The Stranger laid out the details earlier this month:

RCW 29A.04.086 tells us that “”Major political party” means a political party of which at least one nominee for president, vice president, United States senator, or a statewide office received at least five percent of the total vote cast at the last preceding state general election in an even-numbered year.”

Because the “Top-2” primary is only a winnowing primary – not a nominating primary – Mr. Rossi, who proceeded through the Top-2, was not the Republican Party nominee.

Because the two Republicans running for the US Senate seat in 2010 weren’t officially nominated by the Republican Party, that means the Republican Party didn’t get at least 5% of the vote in a statewide election. And that, in turn, means Romney would have had to file as a minor party candidate (requiring his campaign to collect at least a thousand voter signatures at a nominating convention taking place after the first Saturday of June and the last Saturday of July.) And, it seems, Romney’s campaign did not do that.

Back when The Stranger first reported on this, no one expected that Washington’s Secretary of State would actually leave Romney’s name off of the ballot because of this technicality. But now it seems the Libertarian Party is suing (PDF) to keep Romney’s name off: 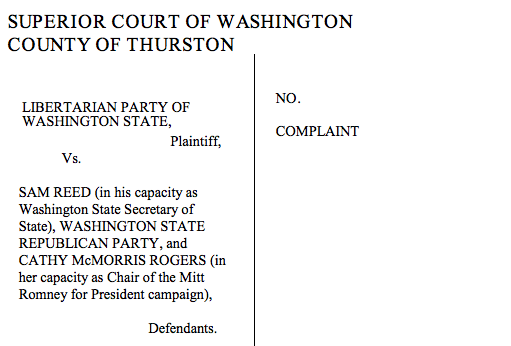 The suit seeks an order declaring that the Washington State Republican Party is “minor party” for purposes of the 2012 general election and directing the Secretary of State to issue ballots for the November election that do not contain the printed name of any Republican Party nominee.

It’s possible the Libertarian Party is just making a show of things to make Republicans sweat. But if they’re serious and if a judge rules to the letter of the law, Romney won’t be on the ballot. I have a hard time believing they wouldn’t find some sort of work-around to avoid that happening but it will be very interesting to watch over the coming months.

***Update*** (8/23/12): A Thurston County Superior Court threw out the lawsuit submitted by the Libertarian party. It’s not yet clear if they’ll appeal.

August 16, 2012
Is It Fair to Call the Family Research Council a 'Hate Group'?
Next Post