Remember Michael Leisner, the Cheerios protest dude who was mad because of General Mills’ pro-gay-marriage stance? 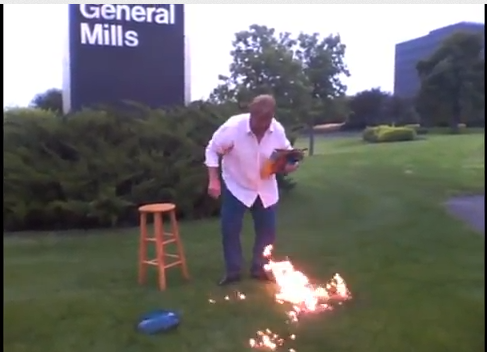 He is no more:

Leisner died Saturday while waiting in his car for his sons to finish playing tennis, said the Rev. Dwight Denyes, senior pastor at Emmanuel Christian Center in Spring Lake Park.

The family said in a statement that the two sons found Leisner in his car and not breathing. He was taken to Mercy Hospital in Coon Rapids and died “of a massive heart attack,” the statement said.

Denyes said that while he didn’t know Leisner well, what the nation saw in the protest video “doesn’t accurately reflect who he was as an individual. He was a very loving and caring father of his four children, a loving husband and he seemed to get along with other people.”

I don’t doubt that last paragraph is true. These anti-gay people tend to be really nice and decent… until they start talking about social issues, at which point their bigotry overtakes all their other emotions.

What’s sad is that this guy’s life will be measured (by everyone outside his family, anyway) by the act of hate displayed in the video. What an awful legacy to leave behind.