My friend Anu Garg runs the popular website Wordsmith.org. One of the best parts of the site is the Word of the Day section where Anu selects a word/phrase and explains its pronunciation, etymology, etc.

For example, this week’s theme is “Latin terms in English” and today’s phrase is corpus delicti: 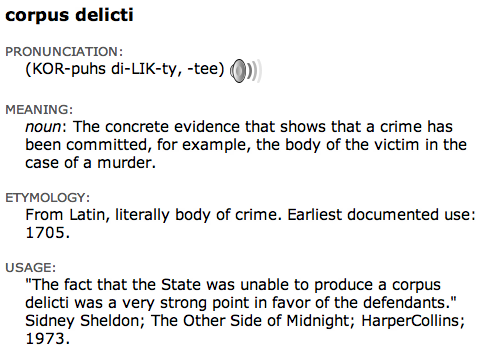 Cool! I learned something new.

As he always does, Anu set up the week’s theme with a little introduction:

Latin is the preferred language of the Vatican, but don’t hold it against the language. It had no say in the matter.

A language never hurt little kids, if you don’t count all the schoolchildren who had to memorize all those “amo amas amat” conjugations.

Latin is often perceived as an ancient or dead language, something for stuffy old people. But many Latin terms can sum up in just a few letters a whole concept that would otherwise take many words or sentences to describe fully.

Did you catch the little joke in that first sentence?

Bill Donohue‘s Catholic League did. And they sent Anu an email accusing him of anti-Catholicism:

So… tongue-in-cheek humor is now bigotry against all Catholics…? Wow. Talk about oversensitivity.

For what it’s worth, Anu has referenced other religions, too. Remember: He’s not pushing an agenda; he’s just trying to make people enjoy learning new vocabulary. When he introduced a week of “Words that appear beheaded” (like the word “estival”), his introduction told the story of how the Hindu deity Shiva once chopped off his son Ganesha’s head because he thought the son did something wrong… when he later found out Ganesha was innocent, he replaced his head with that of an elephant:

It’s unclear why an all-knowing god couldn’t figure out the truth in the first place without needing to decapitate someone. It’s also not clear why an all-powerful god couldn’t reinstate the original head instead of having to sacrifice a pachyderm. But gods are like that. They fall apart as you begin to consider things logically, no matter what the religion.

This week’s words look somewhat like Ganesha before the restoration job. They appear beheaded (some more than others), though they can survive like this too. Your role is that of Lord Shiva. Can you find a letter for each word to rehead it?

It’s funny. It’s entertaining. And it’s not “bigotry against Hindus.”

By the way, if you’re not already subscribing to the Word of the Day, you can do that here.

August 13, 2012
Ask Richard: Dealing With a Friend and Tenant’s Superstitious Beliefs
Next Post