Touchdown Jesus Will Soon Be Replaced by Hug Me Jesus August 7, 2012 Hemant Mehta

Touchdown Jesus Will Soon Be Replaced by Hug Me Jesus

In June, 2010, the Touchdown Jesus statue in Monroe, Ohio burned down: 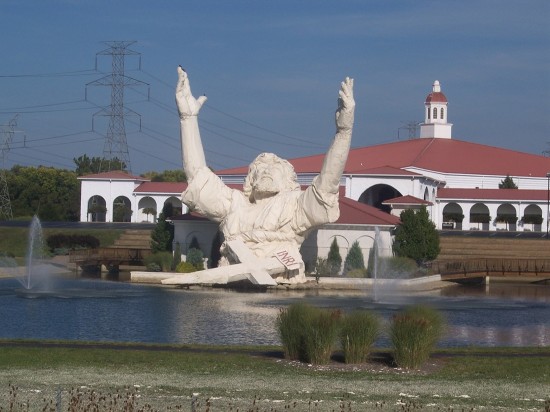 There’s good news, though, for lovers of Jesus statues.

In a couple of months, you’ll be seeing a replacement: The new statue created by Cincinnati native Tom Tsuchiya is called “Lux Mundi” or “Light of the World.”

The original statue the “King of Kings” was destroyed by fire caused by a lightning strike two years ago.

Jesus just wants a big hug. And if you give it to him, you will probably drown.

If only his hands were closer together, we could all shoot baskets…

August 7, 2012 In Scotland, Humanist Weddings Are Overtaking Religious Ones
Browse Our Archives
What Are Your Thoughts?leave a comment