There have already been a couple of posts on this site about how the Hamilton County Commissioners (in Tennessee) have been praying “in Jesus’ name” at meetings.

12-year-old Maia Disbrow was one of the people speaking out against the prayers. 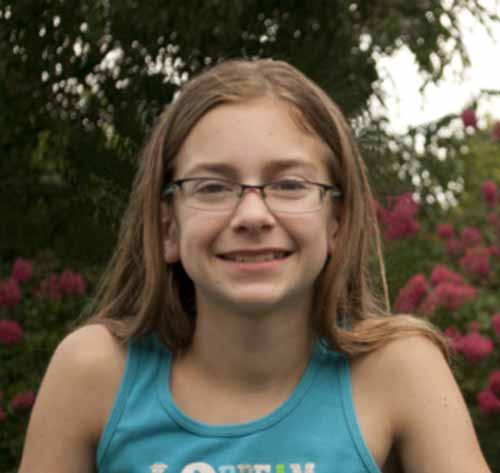 Here’s video of her speaking to the commissioners:

Good morning. My name is Maia Disbrow, and I am twelve years old. I am a perfectly normal young adult, although some of my friends would beg to differ.

I was present at the meeting at which my dad spoke. The prayer was very rude to me and some of my closest friends, not to mention parts of my family.

My dad did not put me up to this. I came because I care about this and things like it. All through elementary school, I was teased and ridiculed by people who I thought were my friends. Whenever the subject of me being a freethinker came up, I was singled out. By my friends. You are doing the same thing that they did to me at every meeting you have. Singling me out. Singling out every single person in Hamilton County who is not Christian.

It is not fair for you to pray openly to your God without praying to all the others as well. I believe a moment of silence would accommodate all beliefs, not just one. And after speaking today, I hope I have some friends left at school next year.

For that action, the Freedom From Religion Foundation is awarding her a $1,000 student activist scholarship, making her one of the youngest recipients of the award ever:

Maia got involved when she accompanied her father to a board meeting where he spoke up against government prayers, and witnessed the board giving a special award to the preacher. Maia decided on her own that she wanted to speak against prayers at the July 18 meeting.

“I realized that there were some things I’d like to say to them. It took me a while to decide because even though I go to a middle school for the arts that is supposed to accept everyone, I was worried. During elementary school, I was bullied about my beliefs and whenever the subject of my religion, or lack thereof, came up, my social status dropped for a few days. When I realized that the county commissioners were actually behaving like a bunch of fifth-grade bullies, I sat down and started writing my address to them.”

“We are so impressed with activism by high schoolers and even middle schoolers in areas of the country that are hotbeds of intolerance, and are standing up not just for their rights but for the Constitution,” said FFRF Co-President Annie Laurie Gaylor.

Congratulations to Maia! An interview with her will be posted on this site soon 🙂

August 6, 2012 My First and Last Video Blog...
Browse Our Archives
What Are Your Thoughts?leave a comment