What’s Easier: Being a Mormon or Being Gay? August 5, 2012 Hemant Mehta

What’s Easier: Being a Mormon or Being Gay? 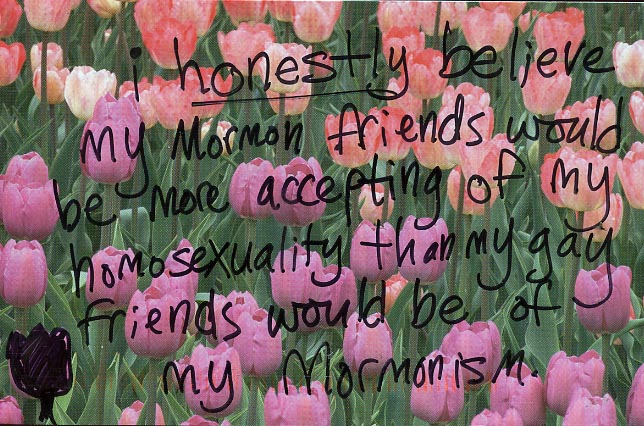 I believe everything the card says, and yet, being Mormon seems much more acceptable in society — hell, we have someone who could be president despite it.

Plus, while religious groups are slowly becoming more accepting of gay people (not necessarily by choice), the LGBT community has good reason to shun religious groups because of their past/current behavior.

The funny thing is you could replace the word “Mormon” in the postcard with “atheist” and it would still be true. Even though atheists almost always support issues of gay rights, many LGBT individuals don’t embrace atheism. I can’t figure out why they would cling to the religious beliefs — it takes a huge distortion of Bible verses to believe God was perfectly fine with gay people (who act on their homosexuality) — but they do. It’s frightening the hold religion can have on people.

August 5, 2012 When People Care More About a Chicken Sandwich Than Your Rights
Browse Our Archives
What Are Your Thoughts?leave a comment