I teach Geometry. I’ve taught it for years. I’ll have two sections of it this year. Probably 65 kids. Every year that I’ve taught the subject, kids have freaked out at the mere mention of the word “Proof.” Without actually knowing what they are or how to do them, they want to give up immediately. And they rationalize their fear by asking me when they’re ever going to use it in life.

You will probably never need to prove that two triangles are congruent to each other, but this unit isn’t really about that. What we’re doing is proving something that you only intuitively think is true. You’re using a logical, step-by-step approach, justifying every single argument you make. Furthermore, you’re only allowed to use a basic set of rules to justify your thinking. Can you explain your answers to me in a way that is easy to understand and impossible to refute?

And then, inevitably, the next day, they forget that speech and ask me when they’re ever going to use this in life. And then I slam my head on the desk. 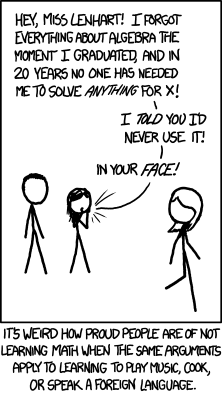 The worst part is that a number of math departments that I know of are pushing to de-emphasize proofs, spend less time on them, make them less rigorous, or get rid of them altogether. Which is the worst possible way to deal with the issue since, in my mind, proofs are the most important part of the class.

So you can understand my rageface as I read Andrew Hacker‘s article in the New York Times asking, “Is Algebra Necessary?”

Back to Hacker’s article, which I’m not a fan of. Here’s what he writes:

A typical American school day finds some six million high school students and two million college freshmen struggling with algebra. In both high school and college, all too many students are expected to fail. Why do we subject American students to this ordeal? I’ve found myself moving toward the strong view that we shouldn’t.

The toll mathematics takes begins early. To our nation’s shame, one in four ninth graders fail to finish high school. In South Carolina, 34 percent fell away in 2008-9, according to national data released last year; for Nevada, it was 45 percent. Most of the educators I’ve talked with cite algebra as the major academic reason.

Algebra is an onerous stumbling block for all kinds of students: disadvantaged and affluent, black and white. In New Mexico, 43 percent of white students fell below “proficient,” along with 39 percent in Tennessee. Even well-endowed schools have otherwise talented students who are impeded by algebra, to say nothing of calculus and trigonometry.

Yes, young people should learn to read and write and do long division, whether they want to or not. But there is no reason to force them to grasp vectorial angles and discontinuous functions. Think of math as a huge boulder we make everyone pull, without assessing what all this pain achieves. So why require it, without alternatives or exceptions? Thus far I haven’t found a compelling answer.

His argument can be boiled down to this: A lot of people suck at algebra and we hold them back because of it, but most students will never need to know the specifics of algebra to do their jobs later in life. So why put such a big emphasis on the subject?

My response is the same one I give my Geometry students: It’s not about specific calculations. It’s about being able to take a set of rules and apply them in different situations.

This idea of not teaching kids things that might be difficult and that they won’t directly use in life could justify getting rid of damn near every class. But we ought to approach them the same way as we do math. English shouldn’t be about the specific books we read — it should be about how we analyze them and what we take from them. History shouldn’t be about specific dates — it should be about the patterns and trends that emerge.

It’s hard to convey all that to students (and some teachers) and most of them will never pick up on that when they’re in school. But that doesn’t mean we should skip out on these subjects.

As Evelyn Lamb at Scientific American puts it, “Math education needs to improve, but if illiteracy were on the rise, I don’t think we’d be talking about eliminating reading from the curriculum.”

(Of course, there are also all the standard math teacher responses: Every career uses some form of math. You’re gonna have to know some basic algebra when you’re buying a house, or creating a budget, etc. Even if you don’t think you need math later in life right now, you may change careers.)

Hacker says later in the piece that requiring all students to take some form of statistics would be more worthwhile, and I agree with him, though not at the expense of ignoring core math subjects.

Art Benjamin actually gave a wonderful and really short TED talk on how schools ought to restructure their curriculums so that the pinnacle of math is Probability and Statistics instead of Calculus. I show it to my AP Stats kids the first day of school:

Benjamin is saying something not too far removed from Hacker — let’s make sure the math we’re teaching to students is relevant to our society. I agree — Statistics is far more relevant to the public discourse than Calculus — but even Benjamin is only suggesting a realignment of our priorities, not avoidance of a tough subject.

(Not to mention you really can’t do basic Prob/Stats without an understanding of basic algebra.)

One of the problems we have in the math world right now is that the standardized tests that are used to evaluate schools and teachers force students to focus on the wrong things. They focus rote calculations instead of critical thinking. Hell, there’s an entire test-prep industry built on helping students get high scores without necessarily knowing all the material.

But, again, the solution to all of this is not avoiding the subject. It’s teaching it better.

For example, one of the things my department is working on this coming year is getting away from spending all our time on skills that just require mindless work — plugging and chugging — and spending more time in class on one or two problems that require a lot more thought. Let’s see how far the students can get on their own (or with a group) and help them when they get stuck. That would force them to think in a much different way, which gets to the heart of why we teach math.

We also have to revise our teaching because we live in a world with graphing calculators and Wolfram Alpha — and we want students to use them. So let’s teach them when and how to use those tools. Again — less regurgitation of skills, more critical thinking.

Will it still be tough? Absolutely. But if we don’t challenge students, why should we expect them to work hard and push themselves? Math isn’t supposed to be easy. But it is logical. And the students who understand the rules tend to do pretty damn well.

What is needed is not textbook formulas but greater understanding of where various numbers come from, and what they actually convey…

Riiight. Reading Jane Eyre and studying the periodic table doesn’t help with any of that either. Should we kick English and Chemistry to the curb, too?

Does anyone know what that formula is? Because it’s actually pretty amazing. It’s Euclid’s formula for generating Pythagorean triples (like 3,4,5 and 5,12,13) — it even resembles the Pythagorean Theorem, c² = a² + b² — and it can be very useful if you’re studying Geometry. But if you just think of it as a series of variables without any context, as Hacker does, it’s pretty meaningless.

Andy Soffer elaborates on that formula:

To be fair, I don’t think we should expect non-mathematicians to recognize this formula. It’s beyond what I think is necessary to be a well-rounded citizen. But I do think we should expect the average American to be able to do the basic algebraic manipulations to prove this identity. This is the sort of mathematical literacy I would deem the rough equivalent of being able read, or being able to write in complete sentences.

I’ll leave you with a much more blunt take on the matter by Maddox, who believe Math doesn’t suck, you do:

Math is exactly like cooking: just follow the recipe. Symbols look confusing? Can’t figure out how to solve a problem? All I hear is, “Waaah! Boo-hoo! I didn’t read the introduction to the chapter that tells me exactly how to solve this generic category of problems!”

… if you’re leading your life in such a way that you never have to do math, congratulations, you are a donkey.

Why is math the only discipline that has to put up with this bullshit? People gladly learn art, music, literature and geography. You’ll even nod like a happy idiot when you learn what a haiku is, and you never complain or whine about how you’ll never use this in your “life.” When is the last time you wrote a haiku, asshole?

July 31, 2012
If Orthodox Jews Take Fruit Trees That Seriously, Be Glad They Didn't Read the Bible Verses Right Before It
Next Post