This is the 55-foot-tall cross resting in a city park in Frankenmuth, Michigan: 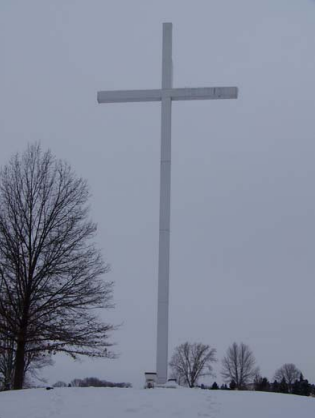 The city doesn’t even pretend it’s not Christian. When it went up in 1976, mayor Elmer Simon said this:

“[T]wo thousand years ago the Lord of all history established an unforgettable symbol… The simple cross of Christ assures us that life does not end with death… [F]rom our local heritage, this Christian symbol suggests that we are also a community under Christ.”

Oh, and two ministers delivered prayers at the ceremony.

After receiving a complaint from a resident, Americans United for Separation of Church and State is taking action, sending them a letter (PDF) warning that a lawsuit may be forthcoming if the city doesn’t remove the cross from public property:

“Display of this cross in a public park at taxpayer expense sends the message that Frankenmuth is an officially Christian community,” said the Rev. Barry W. Lynn, executive director of Americans United. “The city cannot have an official religion, and it can’t send that message.”

Incidentally, this isn’t the first time the city has publicly displayed crosses.

In April, 2008, resident Lloyd C. Clarke said that two crosses on either side of the Main Street Bridge were illegal — and the city removed them on the advice of their attorney.

Then, Clarke went after a cross on the city’s crest. In a dick move designed to intimidate him, a local church gave residents 800 small crosses to put around town. At first, Clarke didn’t care:

“It would be lovely if people put up crosses on their private property — that’s appropriate.”

But faced with opposition, he eventually dropped his lawsuit:

“After talking with family and friends, I have decided to discontinue my effort to remove the Luther cross from the Frankenmuth shield. It is causing too much turmoil in the lives of too many people. Although I think the city’s endorsement of a religion is a violation of the separation of church and state, I regret that my actions have caused such an uproar.”

I can’t even imagine what he had to deal with in order to recant.

Americans United won’t back down like that, though. The city has 30 days to remove the cross or they risk losing a lot of money in a lawsuit.

July 31, 2012
An Atheist from Aurora Reflects on the Tragedy
Next Post