Help an Atheist on a Reality Show July 30, 2012 Hemant Mehta

Help an Atheist on a Reality Show

Have you been watching the ABC reality show “The Glass House“?

But from what I can gather, it’s basically a Big Brother clone.

14 strangers live in a house. Cameras are on at all times. Viewers decide what they wear, eat, etc. Challenges are involved. Viewers vote on who will be kicked out of the house.

After tonight, there will be 6 people left.

One of the remaining contestants, Stephanie Link, happens to be an atheist: 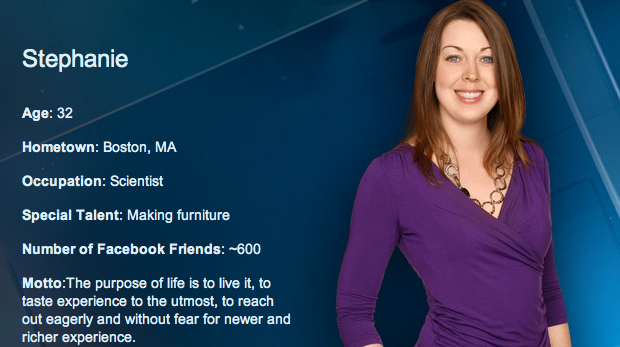 She’s also really smart — a MENSA member and a chemist at Procter & Gamble. If she wins the $250,000 prize, she plans to use it to pursue a PhD.

All of these things have been reasons for other competitors to target her — apparently, she’s “too smart” for them.

The most popular contestant right now happens to be a Mormon who’s waging something of a religious war against Stephanie, using her atheism against her. (Of course, if Andrea, the Mormon, wins, that’s an additional $25,000 going to the Mormon Church…)

So what can you do to help?

After the show ends tonight (11:00p ET), you can vote online for Stephanie. Or, from what her own fans are saying, anyone but Andrea.

You can follow updates on her journey here and here. Let’s hope she survives the next few votes 🙂

(Thanks to Marie for the link!)