Lisa Miller Is Wrong: Atheists Are Not Petty or Closed-Minded July 26, 2012 Hemant Mehta

Lisa Miller Is Wrong: Atheists Are Not Petty or Closed-Minded

Atheists are in a lose-lose situation when it comes to complaining about what seem to be minor violations — but violations, nonetheless — of church/state separation.

If we complain about it, we’re deemed to be haters who want every mention of religion out of the public square. (e.g. A cross in a city’s logo.)

If we don’t complain about it, then years later, the same groups will say they’re entitled to have their faith promoted by the government because it’s “tradition.”

Take the Pledge of Allegiance. No one successfully complained about getting “Under God” out of the Pledge until Michael Newdow came along nearly 50 years later. When his case finally reached the Supreme Court, people acted as if Newdow was doing something wrong — Who cares if one guy is offended by it? No one else had a problem with it until now!

Same with the prayer banner in Jessica Ahlquist‘s school. People kept accusing Jessica of trying to ruin something that bothered nobody for 50 years. If it was really a big deal, wouldn’t someone have said something decades ago?

Religious groups have essentially forced us to take action on every instance of a potential violation of church/state separation. Or else, later on, they’re just going to ask why we never said anything up to that point.

Like Secretary of Agriculture Tom Vilsack saying the other day that he regularly prays for rain:

“I get on my knees every day,” he said, “and I’m saying an extra prayer right now. If I had a rain prayer or a rain dance, I would do it.”

Was it a big deal that he said that? No, not really. Is it ridiculous that he (and millions of other people) actually believe their prayers can change the weather? Absolutely.

And that’s precisely what the Council for Secular Humanism’s Tom Flynn did (emphasis his):

… praying for rain? That’s not just government entangling itself with religion, that’s government wallowing in superstition.

This summer’s prolonged drought, the worst in a quarter-century, is devastating crops and parching livestock. It may bring sharply higher food prices later this year. But it sends the wrong message to distraught farmers when the Agriculture Secretary suggests that the best response is to pray.

First, farmers need to keep doing whatever they can to mitigate the drought’s impact. Time spent praying is time they can’t devote to efforts to save their crops or livestock.

Second, for a Cabinet official to recommend prayer as a solution, or call attention to his own devotions, may violate the Constitution’s prohibition against establishment of religion.

Third and most important, prayer doesn’t work. Secular humanists think prayer doesn’t work because there’s nobody up there to answer those prayers. But if you want to do test the power of prayer yourself, consider this. Apparently Secretary Vilsack’s been praying for rain every day; how’s that working out?

He’s dead right with points 1 and 3. And with point 2, I think he raises a question of what government officials should or shouldn’t say, but it’s not like CSH was about to file a federal lawsuit against Vilsack. (Flynn even cautiously used the phrase “may violate.”)

I’m glad he spoke up about it. No one else seemed to be pointing out that the emperor wasn’t wearing any clothes. The media just smiled and nodded as Vilsack said something completely removed from reality. No one dared suggest that Vilsack was flat-out wrong.

Religion writer Lisa Miller thinks all of this is just a sign that atheists are becoming “petty” and “closed-minded”:

A decade ago, atheists were brave, fierce warriors bent on battling conventional wisdom and easy piety. These days, it seems, atheists are petty and small-minded ideologues who regard every expression of public religiosity as a personal affront — not to mention a possible violation of the First Amendment and a sign of rampant idiocy among their fellow citizens.

Take that, Jessica Ahlquist! How dare you fight to take down a banner that offended no one else…? Even though you were completely right to do what you did…?

I would love to see Miller point out the qualifications for when an atheist complaint is warranted and when it’s not.

Are prayers at government meetings ok?

What about Nativity scenes on government property?

What about “In God We Trust” as our national motto?

It’s not like most Christians groups are fighting these cases. Why would they? They’re the beneficiaries.

We have to fight these cases because no one else will. And every time an atheist files a lawsuit (or even complains about something), there’s a Christian or Christian group out there ready to say we’re wrong because we’re the only ones “offended” by it.

We’re the ones who want to follow the Constitution and prevent a government establishment of religion, large or small.

Miller then spends paragraphs (plural!) explaining how rain dances are — wait for it — a time-honored tradition:

The God of the Hebrew Bible is a cousin, historically, of the Canaanite deity Baal, a sky god who controlled the weather, especially rain. When in the Book of Kings, Elijah proposes a rain-making competition between Baal and the God of Abraham, God wins when he shoots fire down to earth, causing the assembled party to fall on their faces. In celebration of his victory, God makes the sky “black with clouds and winds, and there was a great rain.”

Rain prayers are especially potent among desert dwellers; in the arid Southwest, Native Americans have for thousands of years made prayers, songs, and dances for rain and they continue to do so today.

“Thence throw you misty water,” goes the “Rain Magic Song,” of the Pueblo Indians, “all round about us here.”

I’m reading all that and only one thought crosses my mind:

Yes, it’s tradition, but it still doesn’t work! (wWhich one of us is the journalist here?!) No credible study has ever correlated rain dances with actual rain. And at no point does Miller ever say, “Rain dances don’t work.” (But, you know, it’s tradition. So who cares, right?)

Later, Miller points out that atheists overreacted about Pastor Rick Warren‘s tweet, made several hours after the Colorado shooter killed people in a movie theater: 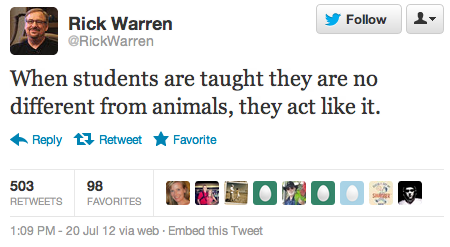 (You won’t find that tweet online anymore — Warren deleted it.)

Miller writes that Warren said his tweet had nothing to do with the shooting — It was actually “anti-pre-marital sex,” she writes — as if that settles it.

I find it hard to believe that someone as tapped into popular culture as Warren is — and someone who’s an avid Twitter user — had no idea the shooting was occurring, hours after the news was everywhere.

By the way, we “attack” Rick Warren because he has a habit of saying stupid things, then deleting them, then saying “I didn’t mean what you thought I meant.” Like with this tweet (which you won’t find online anymore because — shocker — Warren deleted it):

Warren’s response to that one?

“I clearly was hacked.”

By the way, I’ll be the first to point out that atheists can be dicks about all this. After the Colorado shootings, President Obama said to the victims’ families: “May the lord bring them comfort and healing in hard days to come.”

The CSH’s Tom Flynn responded that Obama shouldn’t have said that.

I found Flynn’s comment to be particularly insensitive and I said as much on this site.

There can be a fine line between personal belief in God — which no atheist organization wants to ban — and government endorsement of it. Is it possible that what some people see as the former, atheists sometimes take as the latter? Maybe.

But I’d rather we play it safe by calling out politicians who use religious rhetoric, no matter how mild it may seem.

We can be insensitive sometimes, but it doesn’t mean we should shut up.