Let’s suppose you were to file a legal complaint against a local government endorsing religion. Maybe it’s that they’re putting up a Nativity Scene at Town Hall, or there’s a copy of the Ten Commandments hanging in the local courthouse.

We know exactly how the script goes:

2) The local officials act stunned. No one’s ever complained before!

3) They they begin to demonize the atheists instead of addressing their actual concerns. They hate god! Why are they picking on our tiny town? (Apparently, if a small town does anything, it must be legal.)

4) Religious Right groups paint this as a David vs Goliath battle, with the atheists as Goliath. (Which is strange considering how the Christian groups’ budgets are about 32948242 times that of the atheist groups.)

6) The whole things starts up again somewhere else and the cycle repeats.

That brings us to the city logo in Wyoming, Michigan: 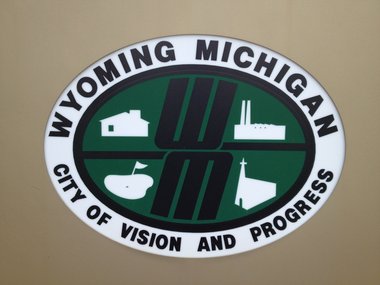 In that picture, you can see a house, a factory, a golf course… and a church.

The logo was adopted in 1959 and no one’s said anything until now. Why not? It’s possible people were afraid to do it — you risk outing yourself as an atheist. It’s also possible no one noticed. But that still doesn’t make it right. That’s why the Freedom From Religion Foundation is right to challenge it.

The [FFRF’s] letter does not explicitly threaten a lawsuit, but does cite numerous federal court cases where a municipality was taken to court over inclusion of religious symbology of some kind on an official seal or logo. In the letter, FFRF staff attorney Patrick Elliott urges the city to “immediately discontinue using this seal and adopt a new representation of the city that is inclusive of all of your citizens.”

“Any claims of historical or cultural significance to the church and Latin cross on the city seal do not relieve the city of its constitutional obligations. The city must not endorse religion. The city may not depict the church and cross because to do so places the city imprimatur behind Christianity. This excludes non-Christians and violates the Constitution.”

Of course, the comment thread on the article is just embarrassing…

Atheists need sensitivity training to deal with their bigotry

The best way to tick off the FFRF is to e-mail them and tell them that you are going to pray for them.

… our country has vigorously moved ahead to eliminate all aspects of religion, except for the belief that sharia law and Islamic expansionism on American soil are permitted…

And then there’s the person who says she’ll fight back by putting up a Christian display on her private property. Something she has always been able to do and is perfectly legal.

In general, a typical overreaction from people who have no idea what the law does and does not allow.

I hope FFRF wins just to teach them all a lesson.

July 25, 2012
Catholic Anti-Safe-Sex Site Tells Readers Not To Use Condoms
Next Post