How low can Chick-fil-A go? Low enough to create a fake Facebook profile in a sad attempt to bolster its reputation online, apparently. (Click image to enlarge.) 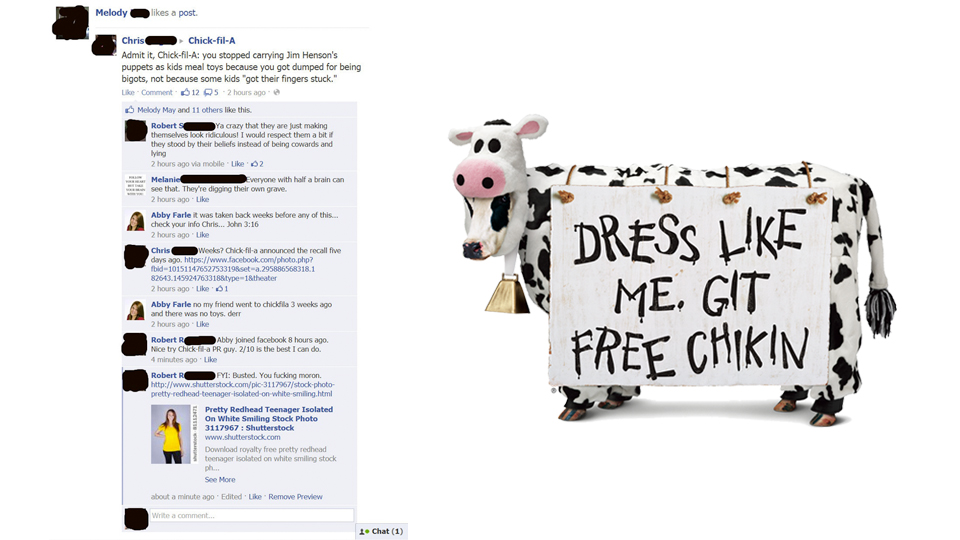 As Chick-fil-A struggles to stay afloat in the aftermath of its CEO Dan Cathy denouncing marriage equality and the Jim Henson Co. cutting ties to the company, Gizmodo got word of another utterly disastrous attempt by the restaurant to keep any credibility.

In this exchange on Chick-fil-A’s Facebook page about the restaurant “voluntarily withdrawing” Muppet toys from its kids meals, a cute redhead named Abby Farle sticks up for the Christian chicken chain and directs other commenters to John 3:16.

Then, another poster does a little digging on who exactly she is and retorts:

Minutes later, the same commenter finds a stock photo of a “redhead teenager isolated on white” that matches the face of the girl leaving the pro-Chick-fil-A posts.

Chick-fil-A claims they had nothing to do with it, according to Forbes, but the profile has since been taken down.

Busted indeed. Whether or not Chick-fil-A’s at fault here, talk about some horrible PR.

July 25, 2012
A Touching Letter to the Boy Scouts of America
Next Post