Chicago Alderman Says Chick-fil-A Is Not Welcome In His Ward July 25, 2012 Jessica Bluemke

A couple days ago, I wrote about how Chick-fil-A CEO Dan Cathy affirmed his anti-gay marriage stance, and about the backlash that was created.  For instance, August 3rd is being declared National Same-Sex Kiss Day at Chick-fil-A.

There were a few responses from readers saying “I don’t get the point of this — you’re not going to change Cathy’s mind about gay marriage.”  And it’s a fair point, I suppose.  Maybe we’ll annoy some employees, but what does it accomplish in the big picture?

Then, this morning, I read this headline:

Yes!  Yes to this!  This is why we do this kind of thing.  Maybe we won’t change Cathy’s mind about whether or not gay people deserve the right to marry the person they love, but we can at least make it known that sharing a bigoted opinion comes with consequences.

Chicago Alderman Proco “Joe” Moreno announced that he plans to block Chick-fil-A from building a second Chicago location in his ward. 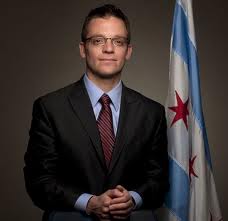 “If you are discriminating against a segment of the community, I don’t want you in the 1st Ward,” Moreno told the Tribune on Tuesday.

Moreno stated his position in strong terms, referring to Cathy’s “bigoted, homophobic comments” in a proposed opinion page piece that an aide also sent to Tribune reporters. “Because of this man’s ignorance, I will now be denying Chick-fil-A’s permit to open a restaurant in the 1st Ward.”

The alderman has the ideological support of Mayor Rahm Emanuel.

“Chick-fil-A values are not Chicago values,” the mayor said in a statement when asked about Moreno’s decision. “They disrespect our fellow neighbors and residents. This would be a bad investment, since it would be empty.”

My heart swells with pride!  Especially when Alderman Moreno addresses First Amendment concerns: “You have the right to say what you want to say, but zoning is not a right.”

Do I think Chick-fil-A is going to go out of business because of things like this?  No, but if they keep getting blocked from opening stores, and if other companies continue to refuse to do business with them, maybe they’ll think twice before donating to anti-gay groups.

(By the way, if you haven’t seen it yet, the letter to Dan Cathy from Boston’s Mayor Thomas Menino is fantastic as well.)

***Update***: [From Hemant] For what it’s worth, this is a legal move called “Aldermanic privilege.” Aldermen can do what they feel is best for their part of the city — it’s the same reasoning Moreno used to keep Walmart from building a store in the city last year.