The Upshur County Commissioners Court in Gilmer, Texas just got a new donation: An “In God We Trust” sign. (Several of them, in fact.)

Long-time Ore City Fire Chief Gaston (Bubba) DeBerry and his wife Hughleen donated such signs not only to the Commissioners Court, but to three of the county’s four Justice of the Peace offices, after Pct. 2 Comm. Cole Hefner convinced his fellow commissioners months ago to join some other area governmental entities in posting that message.

“It’s because of God that we get to enjoy the freedoms that we do,” Hefner told The Mirror after Monday’s meeting.

Riiiight… even if you believe that, why put up the sign?

“I guess just to publicly show our faith in Him,” Hefner said.

“I just felt like that was something… we as Christians here in the county… could (use to) show our faith,” the longtime Ore City civic leader said Monday.

I’m sure the atheists, Muslims, Hindus, and all other non-Christians will feel perfectly at ease in those courtrooms…

And, what, were there no other places in the county where Christians could show their faith?

I did a Google Maps search. Turns out there are TONS of churches in the area. Why can’t you hang the signs in some of them instead? 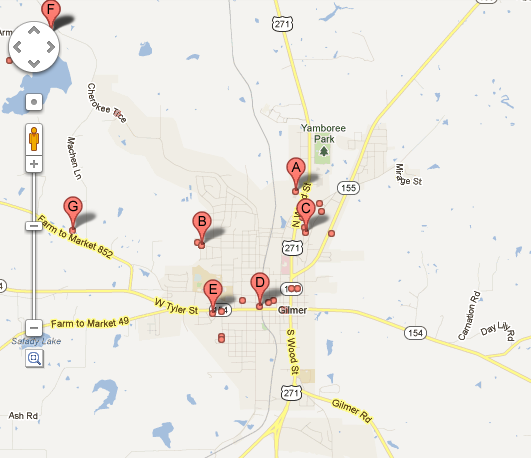 It doesn’t matter if the signs come from a private donation. You can’t put up religious relics like that in a taxpayer-funded courtroom.

FFRF has already been contacted about this.

Since DeBerry and Hefner clearly don’t understand the principle of church/state separation, I can’t wait to see their reactions when they found out.

(Thanks to Michael for the link!)